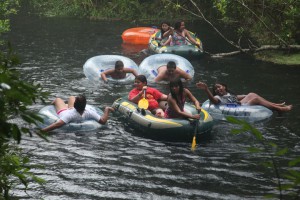 HIGH SPRINGS, Fla. — Summer camp is a place for kids to learn who they are by participating in activities they don’t usually do at home. Instead of sitting around watching TV, playing video games and spending time online, campers spend their time running, swimming, learning and bonding with their peers.

For the ninth year, youth from the Tribal community spent two weeks from July 29 through Aug. 10 at Camp Kulaqua in High Springs in northern Florida. Health, wellness and culture were the themes at camp, so in addition to usual camp activities, the campers attended classes to reinforce Tribal culture, learned good eating habits, saw how they can make a difference in the world and learned how their ancestors foraged and hunted food.

“We want kids to learn to be healthy and fit because we are apt to diabetes,” said Helene Buster, camp director and director of Family Services in Big Cypress. “The focus is to teach them there is a healthier lifestyle.”

During the first week, 102 teens attended, and during the second week, 90 kids, ages 7-11, attended. The camp didn’t allow junk food or downtime; the kids awoke at 6 a.m. and kept busy until lights out at 9:30 p.m. Equipped with a staff of 55 adults, 13 junior counselors, 14 members of the Seminole Police Department and six firefighters, the campers were well supervised.

A nutrition class presented by Allied Health focused on healthy eating and addressed diabetes, using the example of pop star Nick Jonas, who has the disease. It emphasized how making good food choices helps Jonas manage his diabetes.

SPD taught a class on Stranger Danger and how to stay safe. Lessons included knowing parents’ full names, home telephone numbers and addresses, as well as knowing who can pick them up at school.

Making a Difference, presented by Family Services, asked the kids to think about what they would like changed on their reservations and how they would go about making the changes. Some of the changes the campers mentioned included stopping drug and alcohol use, decreasing bullying and planting more trees. Their solutions included forming clubs to have anti-drug and anti-alcohol activities, talking to Tribal leaders, donating money for more trees, respecting elders and staying in school.

“It doesn’t matter how small you are, you are the future of the Seminole Tribe,” said Fred Mullins, Family Services prevention specialist. “We believe in you, and believe you can make a difference.”

Tribal Historic Preservation Office staff demonstrated how food has changed from 14,000 years ago to today and why those changes occurred. From hunting large game to learning to grow oranges, staff explained a timeline of food and culture. The kids also interacted with a display of ancient artifacts, including a giant mammoth tusk, spears, animal skulls, bows and arrows, and tools.

Activities included playing at Camp Kulaqua’s River Ranch Water Park, participating in the “Seminole Olympics,” driving go-carts on the camp’s track, exploring the zoo and nature center, creating racecars from boxes for the annual Boxcar Derby, tubing down the Ichetucknee River and ending the camp with a talent show.

“I like camp because I get to be with my friends,” said Clarice DeMayo, 8, of Hollywood.

“River Ranch is the best,” added Jordan Osceola, 8, of Immokalee. “We get to play in the water.”

“My favorite part about camp was coming together with my friends and hanging out at the gym,” said Travis Stubbs, 14, of Hollywood. “I had a really good time.

The distances between reservations were erased for a week and gave Tribal kids a chance to rekindle relationships.

“My favorite part of camp was being able to see all my friends again, since I live so far away from them,” said Marsha Osceola, 14, of Big Cypress. “It’s like one place that we all get to have fun and like just be ourselves.

After dinner each evening, the kids had a chance to learn skills inherent to Tribal culture. They chose between traditional beading, carving and canoe making. Vinson Osceola, Culture instructor at Big Cypress, brought examples of canoes he is carving from solid trunks of cypress trees. He showed the kids canoes of different sizes, from small toys to one almost 10 feet long. Then he showed them how it is done.

“It is hard work to get the trees and it is hard work to make a canoe,” Osceola said. “Most people lose interest before the canoe is finished. But I do it because this is the way it has always been done. It is your responsibility to know our history and pass it on. Who thinks they learned something in this class?”

Without hesitation, every hand went up.

“We believe elders know many things, but it is up to the youth to approach the elders to get the knowledge,” Buster said. “We keep reinforcing culture at camp because without our culture we are nothing; we are just like the rest of America. If we start blending and forget about our culture and traditions, then we will become mainstream.”

Whether it was rowing hard in a canoe tug-of-war, running that last lap during the Boxcar Derby or surviving the 72-degree water of the Ichetucknee River, the campers had a real sense of accomplishment by the end of the week. And they had enough fun to remember fondly until they board the bus for camp again next summer.