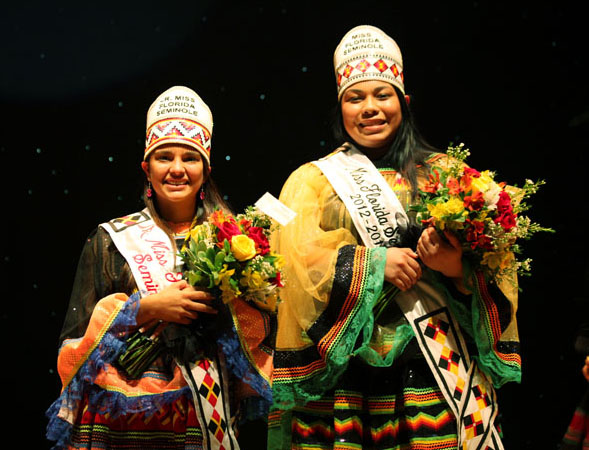 HOLLYWOOD — Thirteen young women celebrated their Seminole heritage and culture on July 28, vying for the coveted Miss and Jr. Miss Florida Seminole crowns. While all wanted the responsibility of serving as their Tribe’s ambassadors, only two received the honor.

“I put my whole heart into it,” she said. “It’s a big responsibility, and I hope I can make my Tribe proud.”

Brighton resident Brianna Nunez took the Jr. Miss title for her performance during the pageant, held at the Tribal Headquarters Auditorium. After not placing in last year’s pageant, Nunez said hearing her name called as the winner this time around was bittersweet.

“I feel ecstatic,” she said moments after outgoing Jr. Miss Florida Seminole Jaryaca Baker crowned her. “There are no words to describe how I feel. It’s the most amazing feeling I’ve ever felt.”

Each contestant – two competed for Miss Florida Seminole and 11 for Jr. Miss – was judged in the areas of traditional wear, talent and impromptu questions. In addition, a five-person panel of judges interviewed each contestant individually, and each completed an essay answering the question, “Where would you take Miss Florida USA in the Tribe and why?”

Aguilar stood out in the talent portion for demonstrating how to make a baby hammock. Once finished, she sang a lullaby in her native language. Nunez sang Amazing Grace in English and Creek, while fellow contestants Alexis Jumper demonstrated how to sew a Seminole patchwork skirt, Thomlyn Billie explained the significance of the Tribal flag and Randee Osceola taught the crowd how to bead a Seminole necklace, just to name a few.

“I see growth in the development of the pageant, as well as in the depth of the contestants,” said pageant judge Melonie Mathews, of the Santa Clara Pueblo/Navajo Tribe. “They’re so rich in culture. It makes my heart sing when I see so many young ladies embracing their [heritage]. They’re keeping their culture strong.”

“I want to empower our Seminole women and make sure they know they can do what they want in our Tribe,” said one recipient, Christine McCall, Princess Committee secretary. She graduated from Florida State University with a bachelor’s degree in 2009. “Miss Florida Seminole has not only achieved higher education but has worked in many ways to contribute to the Tribe that supported them during their reign.

The Tribal Council elected the first Seminole Princess in 1957 to act as the Tribe’s official ambassador and to educate people about the Seminole Tribe of Florida. Current Princess Committee member Connie Gowen had the honor of wearing the first crown. The first official pageant took place in 1960 in conjunction with the grand opening of Okalee Village, and 51 Princesses have since been crowned.

For outgoing Miss Florida Seminole Princess Jewel Buck, the experience offered her a once-in-a-lifetime opportunity. During her reign, she attended events like FSU’s Homecoming and the Miss Indian World Pageant (her favorite experience, she said), all while sharing her culture with the world and serving as a role model for youth.

“I can’t say enough about my experience and what I’ve learned over the past year,” she said. “This was a doorway to new and better things in my life.”

Buck encouraged other Tribal members to celebrate their culture during her farewell address at the pageant, saying that fighting for their traditions will ensure the Tribe keeps their heritage alive.

“We are still here and we are very strong,” she said. “We are known across the world; I’m very proud of that. Fight for our traditions and fight for who you are.”

And while Aguilar knows she has a busy year ahead, she gladly accepted the responsibility.

“I’m looking forward to getting out into Indian Country,” she said. “I want to educate people. I don’t know what I’m going to get out of [the experience] yet, but I know it’s going to be one heck of a ride.”