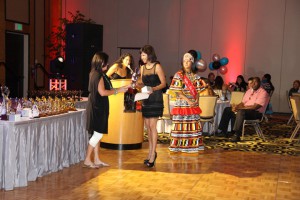 Incentives are often used to motivate people in all walks of life. In education, they encourage students to continue to succeed in school. Tribal students recently were rewarded with fun evenings out to celebrate a job well done during the last school year, just before the new academic year began.

Naples youth were recognized on Aug. 13 at the Juanita Osceola Center. Educational advisers and representatives treated the young scholars to a pizza party.

“We are very proud of you and your parents,” Naples Liaison Brian Zepeda said. “Getting an education is hard work, but it is so much easier when you have family support. I know that it is difficult to be in school all day and then face homework, but you have been accepting the challenge, and your parents have adjusted their schedules to assist you. As a result, the tutoring program is proving to be a valuable asset and your grades reflect your success.”

“Education is like building a house,” Soto said. “It is important to establish a firm foundation upon which you can build. If you remain focused, your structure will be sound and withstand the tests of time. You are the hope and future of not only the Seminole Tribe, but your community and country.”

Liaison Zepeda presented each of the students with award certificates and incentives in recognition of the 2011-2012 school year. Individuals were acknowledged for special achievements, good attendance and conduct. Student Marissa Osceola assisted with the distribution of backpacks for the upcoming school year. Toddlers and preschoolers were given an opportunity to select a gift from a treasure basket.

As an added incentive, the Naples youth had been treated to a bowling party at Woodside Lanes on June 4 at the conclusion of the school year by the Education Department. All ages joined in the fun by taking their turns on the alleys with adults challenging youth and everyone assisting the young sports enthusiasts.

Director of Education Emma Johns expressed her congratulations to the group and offered inspiration and encouragement in establishing new goals; she pointed out that education can make a dream a reality.

“Focusing in the classroom isn’t always easy, but I have to make the grade there if I want to ensure a place on the playing field or basketball court. Life is one big game, and you have to work at it in order to score.”

Over in Trail, dozens of students and their families celebrated a year’s worth of hard work on July 25 at Strike Miami bowling alley at the Dolphin Mall.

Each student received an award from Trail Liaison Norman Huggins and President Tony Sanchez Jr. before bowling and dining.

Liaison Huggins recognized two children – one boy and one girl – who he felt exemplified model students with his Student of the Year award. The recognitions went to Jaya Osceola and Nathaniel Jim, and they both received special gifts for their hard work.

“I wanted to set an example for other kids,” Liaison Huggins said, adding that he encourages parents to get more involved in their children’s education. “It takes a village to raise a kid.”

As for Tampa, a total of 93 incentive awards were presented to their youth on July 10 in a ceremonial dinner at the Spaghetti Warehouse. Tampa Education adviser Tina Ogden was overjoyed at the youth’s accomplishments.

“2012’s Incentives Awards for Tampa was even better than last year’s. We saw an increase in Attendance Awards, which is always a wonderful thing,” Ogden said. “We want the students to understand the importance of being in class. This was a fun event, and it was great to see mostly every family attend. We are very proud of the students and all of their achievements and want to wish them all continued success in the new year.”

The Brighton Reservation made sure to recognize their students for their accomplishments as well. In a combined event, the Education and Recreation departments held an incentive awards and back-to-school bash water day at the Brighton Pool.

In a non-traditional way, students in kindergarten through eighth grade were awarded with a water day to recognize their academic achievements on Aug. 14.

“We wanted to focus on the kids and wanted them to have fun, so we chose to have a water day instead of an awards ceremony,” said Tribal-wide truancy coordinator Becky Rucks.

For lunch everyone enjoyed hotdogs prepared by Recreation staff, as well as pizza, chips and cookies.

Along with the water day, students received an award, backpacks and a check for their academic achievements.

“We are very proud of our students this year and wish them the best next year,” Rucks said.

Over in Hollywood, students also had plenty of entertainment with their incentive awards.

Kindergarten through fifth-grade students enjoyed a fun time at Kabooms Amusement Center in Davie July 30; sixth- through 12th-grade students sped along the go-cart track at Xtreme Indoor Karting in Fort Lauderdale on July 31; high school and college students and graduates as well as GED recipients celebrated at a masquerade ball at the Seminole Hard Rock Hotel in Hollywood on July 26.

This was the first year the Tribe recognized the older students at an event tailored just for them. Approximately 300 students and their families attended the masquerade ball. Awards were given to 26 high school graduates, eight college graduates and 28 students who went back to school and earned their GEDs.

“Put college on your radar and invest in yourself,” said guest speaker Alex Johns, Natural Resource director at Brighton, who just earned his associate degree. “At the end of the day, no one can take your education away from you.”

Once the awards were distributed, the party began. Music by the Osceola Brothers Band and a disc jockey urged people onto the dance floor.

Hollywood Councilman Marcellus W. Osceola Jr. opened the events for younger students with words of congratulations and encouragement to do well again during this school year. At Kabooms, the kids received their awards, ate a hearty meal and spent the evening playing games, roller skating and bouncing to their hearts’ content. The evening at Xtreme Karting gave the kids a chance to let loose and rev their engines around the go-cart racetrack.

All in all, Tribal youth enjoyed reuniting with their classmates during the summer for some fun and recognition of their academic accomplishments.