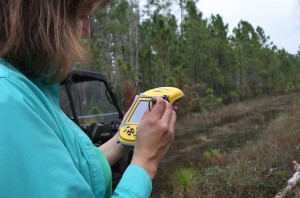 BIG CYPRESS — Several nonnative species of the green and leafy kind are not welcome at the Big Cypress Reservation, and the Seminole Tribe is sending the message loud and clear.

“As the reservation develops, so will the invasive (eradication) program,” said Environmental Protection specialist Stacy Myers. “This is just the beginning.”

The fight against exotic plants that infiltrate and rob the environment of wildlife habitats, native vegetation, water and food sources began in earnest in 2006. Then, the Tribe’s Environmental Resource Management Department began using wetland areas overrun with exotic plants on the northwest side of the reservation as trade-off sites for wetlands developed for community business, municipal buildings or homes.

In the vast 82 square miles of Big Cypress, a 4,145-acre area on the reservation’s southwest side is divided into six sections called Wetland Enhancement Areas (WEAs). So far, 2,718 acres within three WEAs have been treated to kill off the most damaging of exotics: melaleuca trees and saplings, Brazilian pepper plants and old world climbing fern.

The land that surrounds the Ah-Tah-Thi-Ki Museum and some canal banks throughout the reservation have also been treated.

Other plants on the eviction list are Caesar weed, Burma reed, arrowhead vine and air potato. All seven plants are designated by the Florida Exotic Pest Plant Council as Category 1 species “that are invading and disrupting native plant communities in Florida.”

Big Cypress Councilman Mondo Tiger recalled his return to the reservation after living for many years out of state. Soaking in the environment of his childhood, he searched for a taste of the past – a swamp apple – but couldn’t find a single one.

“My heart was broken. It was a real tearful realization of what we were doing to the swamp – we were missing the water,” Councilman Tiger said. “I said then that I’d have to support whatever can be done to bring the water back in.”

Hydrology, water’s distribution and movement in relationship to land, has much to do with invasive plants, said Craig Tepper, director of the Environmental Resource Management Department. He said the problem likely began taking hold in the 1950s with the Central and Southern Florida Project. Authorized by Congress in 1948, the project allowed for a massive canal system to provide flood control and water supplies for cities and agriculture.

“They accomplished the mission of surface water capture and flow off the reservation, but they did not know the effect it would have,” Tepper said.

The interruption of the land and the removal of the water created a new environment for nonnative species to move into and thrive.

Tepper cited the somewhat recent discovery of a native Laurel oak tree found growing on dry land near the construction area of a stormwater and detention reservoir for a citrus grove. Typically, the Laurel oak would thrive at the edge of a cypress dome, a type of swamp in which the trees at the center grow taller than those at the edge. When a Tribal member cut through the tree to examine its growth bands and perhaps tell its life story, the tree was dated back to 1968 – the same year the Interceptor, or L-28, Canal was dug out.

“That 16-foot-deep canal, 200 feet wide, broke through the natural aquifer and changed the environment 3 miles away,” Tepper said.

According to the Center for Aquatic and Invasive Plants at the University of Florida’s Institute of Food and Agricultural Sciences (IFAS), the Brazilian pepper was introduced from South America to Florida in the mid-1800s for use as an ornamental plant. Its bright berries and slightly pointed leaves led to its nickname “Florida holly.”

The melaleuca tree, also called the paper tree, was likely brought into South Florida in the late 19th century for landscaping and wood. Some research indicates that the species further spread in the 1930s by seeds dropped from airplanes for the creation of melaleuca forests to help soak up the Everglades swamp.

The old world climbing fern came from Africa through Asia and eventually, as late as the 1990s, into South Florida. Highly invasive, it is a severe threat to cypress swamps and Everglades tree islands, according to IFAS. Spread by microscopic spores, animals, clothing and equipment, it climbs into the tree canopy, shutting out the sun, smothering native vegetation and allowing fire to spread up its vines.

But the problem that took decades to grow will take generations to fix.

A short drive outside the designated area, on the north side of the Interceptor Canal, a wall of Burma reed separates the canal and land close to the reservation’s wildlife preserve, where countless birds and small animals such as deer, boar and wild turkey live in their natural surroundings. Across the canal, a large patch of arrowhead vine covers the ground, and the trunk and canopy of native Laurel oak, cabbage palm and slash pine trees.

Letts said the arrowhead vines are a sure example of human-assisted invasion. Brought in from northern states where the hearty vine is a common houseplant, it was likely tossed onto the land by a resident.

Myers said residents can help by identifying exotic, invasive plants on their own property and reporting them to the Environmental Resource Management Department for proper removal.

Inside the WEAs, felled melaleuca and dead Brazilian pepper can be seen in swatches with new green growth jutting up from underneath. Some areas are ready for prescribed fires that will clear the way for even more new and diverse native growth.

“If we can bring the water back, we’ll see the return of more native birds, quail, eels, mudfish, deer, traditional medicine, everything,” Councilman Tiger said. “We used to catch 30-pound bass on the reservation. I’d like to do that again.”