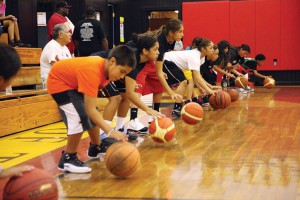 Kids turned out in droves to hone their basketball skills at the Jamal Mashburn Seminole Skills Clinic, but they got a lot more than they bargained for.

They also learned life lessons from the coach who mentored former NBA star Jamal Mashburn, Reginald Kitchen.
Mashburn and Kitchen coached kids from grades 8-12 at separate events that took place in Hollywood, Big Cypress, Immokalee and Brighton from Sept. 7-15. Although designed to help kids with their technique, the skills clinic went much deeper under the tutelage of Kitchen.

“I’ve been around a lot of great coaches, but I haven’t seen anyone teach the game like he does,” said Mashburn, who met Kitchen when playing for the Charlotte Hornets in 2000. “For him, it’s all about life lessons, which last forever.”

The kids ran hard through a series of exercises and drills before they even touched a basketball. Many of the youngest kids approached the drills as a race, whereas the older, more experienced kids knew the purpose of each one was to get the right form and pace.

“The goal is for the kids to have fun and learn the fundamentals of the game while helping them work on personal growth and development,” Kitchen said. “We use basketball as a tool to reach and engage them and get them to talk about things that are on their minds.”

“Everything you do is a reflection on your family,” Kitchen said. “When you are working in a group and are disruptive, you are cheating the other people in the group. You won’t be successful at anything without discipline in your life.”

He told the group he faced these challenges as a coach when putting together a team.

“Knowing that can make each of you a better teammate,” he said.

For some kids, one skills clinic wasn’t enough. Dasani Cypress, 12, of Hollywood, and Mailani Perez, 16, of Big Cypress, gladly attended the clinics at both Big Cypress and Hollywood.

“We are learning better ball movement and skills,” said Dasani, a seventh-grader who plays for Ahfachkee. “I think it will help us in the long run to stay more focused. They were more serious and made you work harder at the Big Cypress clinic, so you wanted to do your best and show what you can do.”

“It’s a great way to get all the kids together,” added Mailani, an 11th-grader who plays for American Heritage.

More of the older players turned out for the Big Cypress clinic, who adapted well to more physical activity.

“There were more younger kids in Hollywood, and they require more mental attention, which isn’t a bad thing,” Muhammad “Coach Moe” Gray said. “That’s the essence of everything and where it all starts.”

Kitchen taught the basic skill of how to make a layup and made sure every participant got the individual lesson. Two additional coaches, Gray and Hanif Hill, assisted Kitchen.

“Hit the top corner of the box on the backboard,” Kitchen explained, referring to the box directly above the net. “It will go in the basket every time.”

The kids each took their turn and proved Kitchen’s point; the ball went in every time they hit the mark.

He also taught the kids the names of each line and mark on the court, how to identify the right side and left side of the court and then gave them a pop quiz to measure their understanding.

“The kids really enjoy it,” said Mashburn, who attended with his son Jamal Jr. “Anything I can pass on from my experience, even if they only get 10 percent of it, that’s successful.”

Mashburn, who played for the Miami Heat from 1997-2000, has run clinics with the Tribe for about five years.

“The skills clinic is great, but you have to allow them the opportunity to play,” he said. “Playing the game is the most important part. At the end of the day, basketball is a game, and it should be fun for kids at all skills levels.”