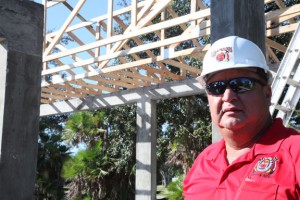 HOLLYWOOD — Steve Osceola has spent his entire life in construction. He grew up going to construction sites with his father, Max Osceola Sr., who had his own construction company. As a young boy, Osceola knew he wanted to follow his father’s example, and he has achieved that goal. Since 2007 he has owned his own business, Redman Builders.

“I’m carrying out my dad’s and my childhood dream,” said Osceola, of Hollywood. “It’s what I always wanted to do.”

Osceola was working for his father in 1994 and expected to continue to work for him indefinitely. However, a car accident took Osceola Sr.’s life at age 63, which left his son to figure out what to do next. First, Osceola got his license as a Certified Building Contractor and became a sub-contractor for the Tribe, working from a home office.

He started his first company with a partner in 1998 but dissolved it a few years later. Osceola met Leo Vezina while working from his home office and hired him as a subcontractor for many jobs. In turn, Vezina hired Osceola for his projects. In 2007, they teamed up and formed Redman Builders, of which Osceola is the majority owner and a licensed general contractor.

“As far as I know, I’m the only Seminole with a [general contractor] license in the state,” said Osceola, a member of the Panther Clan.

Tribal projects account for most of Redman’s business, which keeps Osceola busy. He bids for jobs against other companies, some Tribal owned, but doesn’t get every job.

“I’m not the cheapest, but I guarantee we bid the jobs correctly and stand behind the work,” Osceola said. “Everyone gets their fair share of business.”

Redman doesn’t cut corners, and quality is the company’s No. 1 priority, he said.

“If something on the plan seems incorrect, I’ll bring it up to the architect or project manager,” Osceola said. “We want to make sure everything is done right.”

Indian crews were a staple of Osceola Sr.’s business, and Redman utilizes as many Indian crews as possible. Since they focus on top quality, Redman subcontracts to experts in the trade when necessary. The company builds everything according to the latest Florida building codes, and in Hollywood, they follow the High Velocity Wind Code as well. Osceola believes he has raised the standards across the board.

“You can’t build a house stronger than we do in Hollywood,” Osceola said.

The largest project Redman has completed is the recent expansion of the Tampa Hard Rock Casino and parking garage, done in conjunction with Turner Construction. Other projects include the Hollywood Hard Rock garage, Hollywood Fire Station, and the Hollywood infrastructure and beautification project, as well as many Tribal members’ homes in Hollywood and Big Cypress.

“We focus on Hollywood, Immokalee and Big Cypress. Brighton is too far for us,” Osceola said. “We want to be out there to supervise the jobs.”

Running a business of this magnitude isn’t exactly what Osceola expected; it’s much tougher. The paperwork involved with a job can take longer than the construction period.

“I thought I’d get people to run the jobs, and I’d play golf three times a week,” he said. “I haven’t played golf since December.”

Redman is also in the process of getting a Minority Business Enterprise certification from the state. Once in place, the company can bid on a multitude of government jobs.

“If there is work, I’d rather work for the Tribe,” Osceola said. “I think we won’t get a fair shake unless we have Tribal eyes looking at a job. The Tribe has kept me busy, so I haven’t aggressively bid on outside jobs.”

A family man, Osceola lives in Hollywood with his wife, Jackie Thompson Osceola. His children, Steven Billie and Rachel Billie, are not in the family business, but he enjoys taking his four grandchildren around the reservation to show them the buildings and homes he built.

“I’m leaving my mark on the Tribe,” he said.

Osceola’s advice for people interested in starting a business is simple: Understand the business thoroughly, be qualified to run it and hire the professionals you need to help, including attorneys and accountants.

“The best part of this job is being able to work for my own people, make them happy and give them what they deserve,” Osceola said. “It’s fulfilling. There is a lot of hard work and many sleepless nights, but it’s what I want to do.”