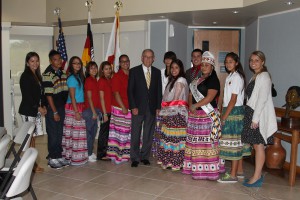 HOLLYWOOD — Members of the Seminole Youth Council gathered at Tribal Headquarters on Sept. 17 to have a roundtable discussion with former U.S. Sen. Byron L. Dorgan. During the meeting, they informed him of their organization’s accomplishments and their individual concerns facing Tribal youth.

During his terms in office, Sen. Dorgan, of North Dakota, served as an advocate for Native American issues and brought attention to the disparities existing in Indian Country. Through the Center for Native American Youth (CNAY), which he founded in 2011, Sen. Dorgan meets with Tribal youth across the country to create connections and build new opportunities for them.

“Some of the people who were here first in this country live in Third World conditions,” he said. “I’m determined that we try to make a difference and try to change that.”

The meeting provided an opportunity not only for Sen. Dorgan to learn about the Seminole Tribe but also gave youth a chance to learn about CNAY, a policy program headquartered in Washington, D.C. that brings greater national attention to the issues facing Native American youth and fosters solutions.

Sen. Dorgan founded CNAY with $1 million from his excess campaign funds and has held 30 roundtable discussions in nine states with 100 Tribes since 2011.

During the meeting, youth from Hollywood, Big Cypress, Naples and Immokalee gave a PowerPoint presentation about the Seminole Youth Council and how it has made a positive difference in their lives. Founded in 2011, the Seminole Youth Council strives to strengthen leadership skills and provide interaction with Tribal and non-Tribal officials. Members host food and clothing drives, community cleanups and basketball tournaments. They also attend national conferences to meet other Native American youth.

“It’s a great opportunity to get our community and Tribe into activities,” said Dasani Cypress, a seventh-grader at Ahfachkee.

“We have seen a lot of youth who face difficulties,” he said. “My commitment is to try to change those circumstances.”

Tribal youth voiced their own concerns to Sen. Dorgan about issues facing their Tribe. They touched on substance abuse, bullying, stereotypes, loss of culture, dividends and higher education.

“You don’t see a lot of youth aspire to pursue higher education even though we have every resource available to us,” Alexis Aguilar said, adding that receiving monthly dividends could be one of the reasons behind it.

Other members of the Youth Council agreed about the importance of education. Youth Council president Neyom Osceola cited education as a way to sidetrack substance abuse, while Sara Huggins explained how having an education would ensure success if Tribal members ever stopped receiving dividends.

“It was kind of scary at first,” Cypress said, “but after listening to other people, it makes you really want to share your concerns so people can pay attention and get programs started to address those issues.”

President Tony Sanchez Jr. praised the students for participating in the Seminole Youth Council and encouraged them to stay actively involved.

“I love to see the enthusiasm and the willingness to participate,” he said.

President Sanchez told the Youth Council to approach him personally if they ever wanted to address their concerns.

“I love to listen to what your concerns are because I truly believe you are our future,” he told them.

Sen. Dorgan completed the discussion by commending the students for their hard work and dedication.

“You have a lot to say, and it’s very important you say it,” he said. “There are a lot of reasons for you to be proud of what you’re doing.”