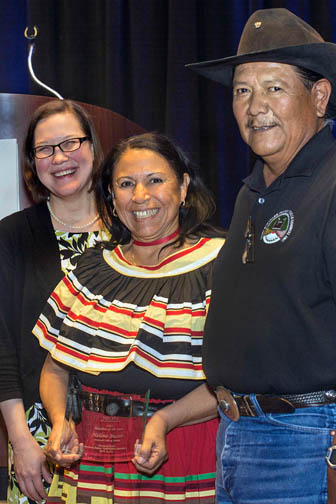 PORTLAND, Ore. — Helene Buster’s life is filled with the problems of others. Some days she finds resolutions. Some nights the director of the Tribe’s Family Services Department goes to bed with the weight of concerns too heavy for rest.

Drug- and alcohol-addicted Tribal members and the children caught in the crossfire are her leading concerns.

“I know through my own meetings that I can’t really control everyone. I can’t survive for anyone or sober up anyone. I can only try to be an example of what sobriety is and what it could be,” Buster said. “I have to believe in a higher power.”

But she does not wait on divine intervention. A recent award bestowed on Buster for her role in developing a list of tribal programs to help proves it.

On April 19, at the opening of the National Indian Child Welfare Association’s (NICWA) 33rd annual Protecting Our Children National American Indian Conference on Child Abuse and Neglect in Portland, Oregon, Buster’s tireless dedication was acknowledged with NICWA’s inaugural Member of the Year Award.

“Helene is a cherished part of the NICWA community. When it came time to select our member of the year, it quickly became clear that she was the ideal candidate,” said NICWA’s executive communications manager Nicole Adams.

The award “recognizes outstanding individual service, contributions and leadership in Native American communities, as well as participation in the organization membership.” Started in 1983 in Portland, Oregon as the Northwest Indian Child Welfare Institute to develop teams of child welfare workers mostly for northwestern Tribes, the nonprofit organization evolved to serving as a voice for children and families throughout Indian Country.

Membership is made up of tribal governments, urban social services and staff members who serve on the frontlines.

A registered nurse, Buster was named the Seminole Tribe’s head of Family Services in 2005 and has since been at the forefront.

She co-founded the Seminoles in Recovery support group and brought Alcoholics Anonymous meetings to the reservations; prompted diabetes support and awareness services by spearheading a diabetes and kidney research project; and led the creation in 2006 of John’s Place rehabilitation center in Fort Lauderdale, which integrates Seminole culture and tradition into residential drug and alcohol treatment.

Recent accomplishments include the inauguration of the Seminole Tribal Court on Feb. 19, which Buster spearheaded with a team of Tribal members. She also led the creation of the Court’s soon-to-be adopted Seminole Children’s Code, which will enter into law the crucial steps for the removal of Tribal children from harm’s way but keep the children in the care of Tribal families.

“Protecting our children is the only reason I ever worked on the Tribal Court. The process is to keep problems out of state courts,” Buster said.

The children’s code will dictate how cases are handled from the very first telephone report.

In January, the Tribe opened the Seminole Youth Home, a 5,381-square-foot, eight bedroom home for children ages 10 to 17 who have been removed from parents for various reasons. Buster and her Family Services team worked on the project for a decade.

Adams, speaking for NICWA, said Buster’s life of advocacy for the welfare of others is practically unmatched.

“With an almost unparalleled list of accomplishments and a demonstrated lifelong commitment to service to her community, it is clear that the award is well-deserved,” Adams said.

For Buster, resolution lands in the hands of Tribal members to get treatment and find peace with their pasts in order to reunite and restore their families.

“I am heavy on the recovery 12-step program,” Buster said. “If we get people sobered up and off drugs, we will see a better community and that makes a better life for our children.”