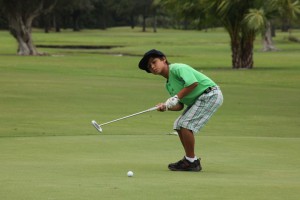 CLEWISTON — Succeeding at golf isn’t child’s play, but at the Tribalwide Junior Golf Tournament, children enthusiastically came out to putt. Although their levels of experience varied, their youthful exuberance enabled them to have a fun day on the links.

Youth from ages 6-18 enjoyed some friendly competition at the Clewiston Golf Course on Aug. 25. Depending on their ages, the 36 golfers played either six- or nine-hole games on the 18-hole championship course.

“Golf is a great game you can play for your entire lives, even when you are old like me,” Amos Mazzant, Ahfachkee’s head golf coach, told the competitors before the tournament began. “I’m glad to see so many of you out here to play.”

Playing golf requires more than hitting a ball straight down the fairway and sinking putts. It teaches life lessons, including commitment to practice, patience and focus.

This was the first Tribal youth tournament, but Tribalwide Recreation director Richard Blankenship plans to hold one every few months.

“The turnout was much greater than we expected,” Blankenship said. “It was an excellent event – outstanding. I give a lot of credit to the golf instructors.”

Those instructors were Mazzant, in Big Cypress; Jason Tommie, in Brighton; and Elliot Young, in Hollywood.

“I like working with the kids,” Young said. “I’m shocked at how many were here. This is just the beginning for them.”

Before teeing off, the young golfers practiced putting on the green by the clubhouse. Veteran student golfer Quenton Cypress, 17, gave some pointers to the other kids.

“I like playing golf; it’s peaceful and quiet,” said Cypress, of Big Cypress, who has played on the Ahfachkee team for two years. “But it’s very challenging at the same time.”

Kids teed off in groups of two, three and four and walked the course. Parents and other adults followed closely in golf carts and shared tips with the young golfers at every turn. Josh Jumper, Recreation site manager in Big Cypress, led a foursome, whom he coached along the way.

Mazzant made his way around the fairways, watching his students as they played and offering advice as needed. Many of them had never been on a golf course, let alone played in a tournament.

“I teach them in a cow pasture next to the Junior Cypress Arena,” Mazzant said. “We recently had to move because they needed the pasture for some horses. We have an artificial green in a chickee to practice putting.”

Participants all had a great experience and may have improved their games a bit for the next time.