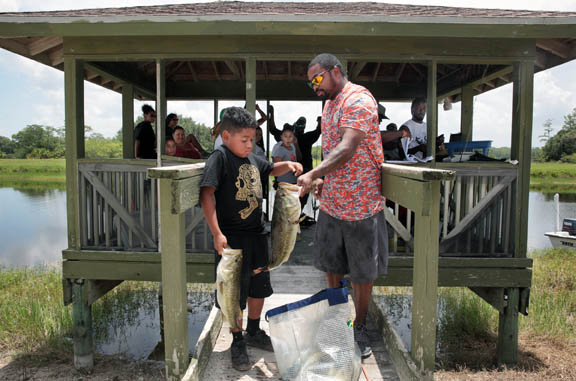 BIG CYPRESS — From boats or banks, 11 adults and 22 youngsters hoped the big one wouldn’t get away June 27 during the Take a Kid Fishing Tournament along the Big Cypress canals.

“We catch a lot of fish together,” said Zechariah Stockton, 7. “It’s fun because we’re together as a family. We usually fish for the big ones.”

The Stockton family – dad, Kassim; and children, Zechariah and Michael, 9 – snatched first place with 15.3 pounds of bass, including the largest in the tournament weighing 6.7 pounds.

They also caught the biggest tilapia at 2.9 pounds.

The family fished on the Miami Canal but caught most of their fish at the spillway. They fish together regularly but rarely keep their catches.

“We release them so we can catch them again,” Kassim Stockton said.

Valholly Frank and Harmony Cypress joined Big Cypress Board Rep. Joe Frank on his boat to traverse the canals in search of fish.

They brought back 10.2 pounds of fish and the second largest bass of the day weighing 3.1 pounds.

“At first we didn’t get any fish,” said Valholly, 12. “We were too impatient. It was hard for energetic, young girls.”