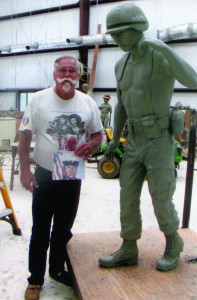 LAMONT, Fla. — For the past 30 years, Bronze by Cooley artists Bradley Cooley Sr. and son Bradley Jr., of Lamont, Fla., have created Seminole-influenced bronze sculptures. Many of their creations can be found on Seminole reservations, the most recent being the life-size sculpture of veteran Herman L. Osceola located in front of the Big Cypress Gymnasium.

“I started about 40 years ago when I was living in Tampa, Fla. and started doing European contact and looking at the Florida Indian,” Cooley Sr. said. “I started looking at early drawings and ancestors to the Seminole.”

He began creating sculptures of Seminole history with the sculpture “Battle of Okeechobee” using the face of Tribal member O.B. Osceola Sr.

Cooley Sr. began working with the Seminole Tribe after artist Guy LaBree introduced him to Chairman James E. Billie, who commissioned Cooley Sr. to create a sculpture known as the “Legend of Kissimmee River.” The Cooleys have predominately done sculptures influenced by the Seminoles ever since.

“We have been doing Seminole wars all the way to modern-day Seminoles and now the Seminole Princess,” he said.

Since 2005, the father-son team has immortalized Miss Florida Seminole by having a bronze tabletop sculpture created of her in full traditional clothing, wearing her crown and sash.

Creating a sculpture can take six to seven months from start to finish. The process begins with molding the clay, which can take up to three months. The Cooleys then cover the clay sculpture in a latex rubber mold and create a cast. They then ship out the cast to create the bronze statue.

When asked what the most difficult part of the process was, Cooley Sr. replied with a laugh, “The molding. I hate molding.”

The delicate and intricate pieces of Seminole clothing make molding time consuming. The sculpture “The Clans” took more than a year to complete and is the second-largest sculpture the team created. The sculpture is of a 12-foot-tall Abiaka surrounded by the eight clans and stands behind Billie Swamp Safari on the Big Cypress Reservation.

With a collection of sculptures spanning the last 40 years, Cooley Sr. explained why one of their proudest sculptures was of the life-size Seminole warrior Osceola. To date, Osceola stands on both Hollywood and Brighton reservations, as well in front of the R.A. Gray Building in downtown Tallahassee.

“It came out so well, and it reflects in the sculpture,” he said.

The Bronze by Cooley father-son team has created about 100 pieces of Seminole-influenced artwork. The most recently finished sculpture is the tabletop statuette of the late former Chairwoman Betty Mae Jumper sitting at a sewing machine.

“We wanted to create sculptures of all the prominent figures of the Seminoles,” Cooley Sr. said.

The next sculpture they’re creating is of Chairman James E. Billie wrestling an alligator, as well as the newly crowned 2012 Miss Florida Seminole Alexis Aguilar.