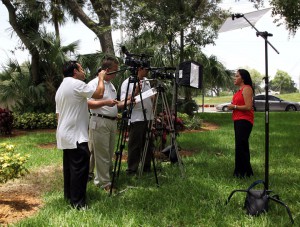 HOLLYWOOD — Paula Bowers-Sanchez wants to empower Tribal youth and encourage them to follow their dreams, whatever they may be. Her message is to work hard because then success will naturally follow. To get the message out to the youth, she recently taped a few public service announcements that will play in Tribal schools and on Facebook and YouTube.

The messages of the PSAs include a general welcome to the school year, the importance of staying in school, the negatives effects of substance abuse and the value of staying fit and healthy. Possible plans for further PSAs include a cultural exchange to ensure Tribal traditions continue with future generations.

The videos also stress the responsibility the youth has for the survival of the Seminole Tribe. Bowers-Sanchez urges students to aim high because they represent the Tribe’s future.

“You could be the next founder of Google, Facebook or Apple,” she said. “Just get out there and do your best. You can achieve anything if you just give it your all.”

Bowers-Sanchez was born in Brighton, raised in Hollywood, graduated from Hollywood Hills High School, and earned a bachelor’s degree in psychology from New York University and a master’s degree in mental health counseling from Nova Southeastern University.

“When I went away to school in New York, I was all alone,” Bowers-Sanchez said. “It was scary, but it was the best thing I ever did.”
The message she hopes the youth will learn is simple but critically important to their lives: Work hard, do your best and you will succeed at whatever you choose to do.

“I was born and raised on the reservation; I came from where these kids are now,” she said. “I want them to know if I can do it, so can they.”