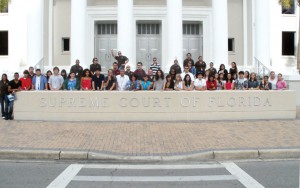 TALLAHASSEE — Every summer for the last 33 years, a select group of Florida’s Native American youth flocks to Tallahassee for two intensive weeks of learning about Tribal government, Wall Street, effective communications, mathematics and applied finance. The Florida Indian Youth Program (FIYP) is a summer program, but it isn’t camp. Not by a long shot.

Under the watchful eyes of chaperones and counselors from July 14-28, the group of 45 students attended challenging classes, toured the state Capitol and lived in the dorms at Florida State University (FSU). The program, part of the Florida Governor’s Council on Indian Affairs (FGCIA), aims to motivate students to finish high school and continue in a post-secondary program, college or the military.

Bob Kellam, the FGCIA employment and training director who runs the program, said probably 98 percent of students who participated in the program during its 33 years continued with school.

“It was a real eye opener,” said Melton, 18, of Big Cypress, a freshman at FSU. “Seminoles usually only know other Seminoles, but there were so many other Tribes there. It showed me that each Tribe is different, but we are all Native Americans.”

Some of the 13 Tribes represented at FIYP included the Apache Tribe of Oklahoma, Cherokee and Lumbee Tribe of North Carolina.
Osceola’s two sisters and mother went to FIYP, so she always knew she would go, too.

“We learned a lot about technology, how to keep a budget and that you should definitely go to college,” said Osceola, 14, of Big Cypress. “We did math in groups. The class was not just about the answers, but how you get the answer. We learned different ways to get the same answer. It was fun.”

The FIYP used its bank as a teaching tool. Students got paid $6 per hour to attend classes and learned how to manage their money, balance a checkbook and follow bank procedures for deposits and withdrawals within their checking accounts. Each Thursday they went to the mall, so students had to put their new-found knowledge to use and budget carefully.
Students also participated in an online Wall Street investment program, where they invested a hypothetical $100,000 in stocks and tracked their portfolios. In the process, they learned about mutual funds, bonds, credit reporting and a variety of other important investment practices.

“The Wall Street class taught me that you never know about the stock market, so you have to invest in different types of companies,” Osceola said. “We had agriculture and consumer goods companies; the consumer goods dropped the most.”

A critical component of the program is learning about government, U.S. and Tribal, and the concept of sovereignty. The students created their own Tribe, adopted a constitution and elected officers.

Past participant Christine McCall, who attended FIYP when she was 14, said she had no concept of sovereignty or her role as a Tribal member at that age.

“I learned how to share my culture with other people who didn’t grow up with the same traditions,” said McCall, a student at the Art Institute of Fort Lauderdale. “The program also taught me people skills. Living on a reservation, you get used to who you are with all the time. When you go somewhere new, you have to know how to interact and present yourself.”

Many Tribal members who attended FIYP still use the skills they learned in the program.

“I learned how to work to attain your goals and still use those strategies,” said Pedro Zepeda, traditional arts and outreach coordinator at the Ah-Tah-Thi-Ki Museum. “FIYP was my first time away from home. It wasn’t like summer camp; it wasn’t all lakes and canoeing.It gave us a little glimpse of college life. I believe it’s important during those formative years to have a memorable experience like that.”

“The classes kept our minds stimulated,” McCall said. “I believe we should be constantly learning and educating ourselves.”
The importance of attending FIYP wasn’t lost on this year’s group.

“I think a lot more kids should go and get the experience,” Osceola said. “It looks good on a resume and in a job interview. It shows you can work with a team and are open to new things.”