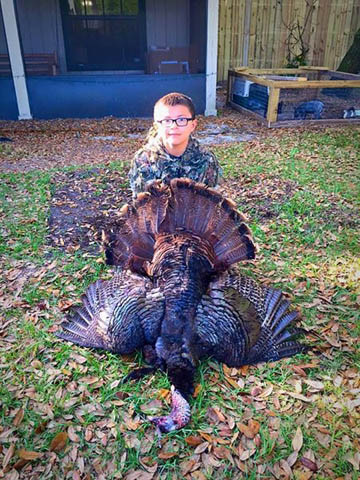 BIG CYPRESS — Call it beginner’s luck or call him a naturally skilled marksman, but either way Elijah Cook nabbed his first turkey with the first bullet he ever shot from his new Remington 20-gauge shotgun.

“I didn’t expect to hit something because I never went hunting before,” the 11-year-old said. “When I did, I felt very excited.”

The hunting expedition March 17 took place during the Big Cypress Wildlife Department’s Spring Gobbler Turkey Hunt. Eli, as he prefers to be called, went out with Wovoka Tommie at about 5 a.m. After setting up, they waited. Eli tried his hardest to remain still and quiet.

“The big challenge was the mosquitoes,” said Eli, a sixth-grader at Clewiston Christian School. “Wovoka found a leaf to keep them away, so I rubbed it on me and it kept them away for a little while.”

They decided to move to another spot and then another. At about 8 a.m., they found a location where turkeys were plentiful. They tracked one behind a palmetto, and Tommie told Eli to take aim.

“The turkeys came in and a second later, he nailed his first turkey,” said Eli’s mother, Sissy Cook. “I bought him his first shotgun the week before and the first shot on that gun was his first kill.”

Although Eli spent plenty of time at target practice with a .22-caliber rifle, he had never fired a shotgun.

Cook saved the tail feathers, beard and spurs for mounting in a shadow box along with the shell casing. Eli plans to hang it in his bedroom.

“Hunting is a learning experience,” Cook said. “Patience is the main thing you learn from it; that’s one of the things I hope he learns.”