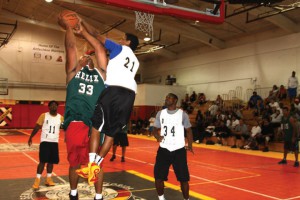 BIG CYPRESS — No one could see them, but Minnie Tigertail felt the presence of her two sons on the court at the Tigertail Brothers Memorial Basketball Tournament held from Sept. 13-15.

It’s a mother’s love that keeps the Tigertail Brothers Memorial Basketball Tournament going on its sixth year at the Herman L. Osceola Gymnasium; and it’s a mother’s touch that makes sure there’s food on the table for hungry players and spectators, and prizes and hugs for the winners.

“It’s [a] happy feeling when the tournament’s coming up because you know it’s for your sons,” Tigertail said, manning the snack table next to the court during the tournament. “It’s just fun putting it on and watching [the players] out there.”

For the second year, the tournament was open to both Tribal and non-Tribal teams, attracting more competitors. Twenty-five teams competed in all, including five Legends’ teams, 14 men’s teams and six women’s teams.

Players came from across Florida, including Miami, Broward County and Orlando, as well as from around the country, including Oklahoma, Arizona and Mississippi.

Tigertail awarded the first- and second-place teams money and athletic bags, which she funded by saving up her dividend checks.

A new addition to this year’s tournament, Tigertail also gave MVP windbreaker jackets to one player from each of the championship teams.

Of the 14 men’s teams to play, Lords of the Plains came out on top, making it well worth their flight from Oklahoma.

Lords of the Plains, made up of players from a variety of Tribes, sweated it out until almost 3 a.m. Sunday to beat Pembroke Pines’ Warriors 85-65 in the championship game, leaving the Warriors in second place.

“It was easier than I thought it was going to be,” Lords of the Plains player Joe Green, from the Creek Tribe, said of taking the championship title. “We had maybe one close game (against the Plainsmen) and we didn’t lose at all. Everyone on the team played really, really good.”

“We just had three really good scorers who can score from anywhere on the court, and our defense was really good,” Green said. “Our team chemistry was great.”

Big Town, from Trail, took third after a painfully close 43-44 loss to the Warriors.

The six women’s teams brought fierce competition to the courts as well.

And that they did. The Lady Ballers, from Trail, swiped the championship title for the second year in a row, but not without a fight.

Although the Lady Ballers won all their games, they beat Hollywood’s Mystery Ballers by just 1 point, with a score of 31-30.

In a semi-finals game on Sept. 15, ABC, from Trail and Oklahoma, squeezed out another 1-point victory over the Mystery Ballers with a score of 21-22, leaving the Mystery Ballers in third place and pitting the Lady Ballers against ABC for the championship game.

The preceding close games kept both teams on their toes in the finals. The Lady Ballers were up 22-13 at halftime and finished with almost as strong of a lead, ending the championship game 40-32.

Tournament MVP Jenna Plumley, from Oklahoma, of the Comanchee, Otoe, Pueblo and Pawnee Tribes, said winning was a team effort.

“Our focus was here a little bit more today,” she said. “We just had to make more shots. Our mindset was a little bit better today.”

Adriana’s father, Trail Liaison Norman Huggins, came out to watch Adriana play and support the Tigertail family. He used to play ball with Duane and Malcolm.

“They were hard players,” he said. They were just competitive. They were great guys.”

In the Legends’ games, three men’s teams and two women’s teams ages 35 and up vied for the prize on Sept. 13.

As for the men, Immokalee’s Still Got Game took first place over the Brighton Rebels with a close score of 31-29. The Rebels placed second.

Big Cypress’ Living Legends took third place after a 10-35 loss to the Rebels.

In the Legends’ women’s division, Immokalee’s Young Legends beat Carlene, of Big Cypress, twice in a row (42-26, 31-22) to claim the championship title.

Several Tigertail family members attended the tournament out of respect and support for their loved ones. Some participated in the tournament, while others helped run the event.

As for family on the court this year, Mary said several of her grandchildren and nephews came from Orlando to play. Among them, DeForest Carter and Tyler Tigertail played for The Dream Team, and Gregory Carter played for Flight. She said they “play and jump like [Malcolm and Duane] used to.”

Mary Tigertail, the late Tigertail brothers’ aunt, used to play in the tournament for Big Cypress.

This year, arthritis in her hand kept her away from the ball, so she helped her sister Mary and her granddaughter Kellie Tigertail serve food.

Kellie said she’s been involved in the tournament since it first began. For the first couple years, she played on a Big Cypress women’s team. Now, although she doesn’t play, the University of Miami senior still makes time to come show her support.

As she watched the tournament on Sept. 15, she remembered watching her late uncles, Duane and Malcom, play on those same courts growing up.

“It’s just good that we can put on a basketball tournament in their memory. They loved the rez and they loved playing basketball, like most Indian kids.”