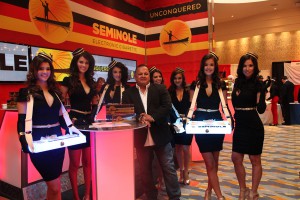 HOLLYWOOD — With plans to conquer the national market, the Seminole Tribe of Florida, Inc. introduced the Seminole Unconquered brand of electronic cigarettes and cigars at the NIGA mid-year conference on Sept. 18. With more than 500 people from around the country in attendance, the time was right to unveil the Board of Directors’ latest product.

The cigarettes are a joint venture between the Board and Safecig in which the Tribe has ownership of the brand. They will sell the product in Tribal smoke shops, casinos, trading posts and the Tribal store at the Hard Rock Hotel, as well as online at www.seminolecig.com. They have plans to manufacture the product in Hollywood in the near future.

According to the Seminole Unconquered website, electronic cigarettes provide nicotine without any smoke, tar, ash or smell and only contain vaporizing fluid, distilled water, natural flavors and essential oils, in addition to nicotine. A heating coil inside the cartridge vaporizes flavoring fluid that contains nicotine. When puffed, a flow sensor automatically turns the coil on, heats the vaporizing fluid in the cartridge and generates vapor. The vapor does not contain harmful second-hand smoke.

“If you are smoking these, you are not smoking tobacco,” Safecig CEO John Cameron said. “You don’t feel the need to pick up a cigarette; it feels like you are smoking. This is the first technology that could save millions of lives from tobacco-related illness and death.”

“This is a new opportunity for the Tribe,” President Tony Sanchez Jr. said. “I was hooked from the very beginning when I was told about how many people succumb to complications from smoking. If we can save some individuals, then we can affect their lives.”

Hollywood Board Rep. Chris Osceola, a smoker for 25 years, kicked the habit with electronic cigarettes.

“I haven’t smoked a cigarette this year because of these things,” he said. “They can change your life. The rest of the Board was looking at me since I was the only smoker; I was the test dummy. I’ve tried different products, and this is the best one.”

The Board spent nine months negotiating with Safecig, the manufacturer of the product. In addition to owning the brand, the Tribe owns the manufacturing side of the business as well. They will also have the capability to make private label brands for other companies once they move the manufacturing to Hollywood, which they have planned for May 2013.

“This was a venture we knew we wanted to be in,” Brighton Rep. Larry Howard said. “This is better for the future. We are always looking for other businesses for the economic arm of the Tribe.”

During the conference, about a dozen striking women walked around the Hard Rock Hotel lobby and casino handing out samples.

The cigarettes come in a variety of flavors, including Classic, Tribe, Menthol, Traditional, Columbian and Trinidad, and each cigarette lasts about 120 puffs; one pack of cigarettes is roughly equivalent to 180 puffs, according to their website. The cigars come in three flavors: Chairman Cuban, President Dominican and Representative Honduran; each cigar is equivalent to 10 tobacco cigars.

“The launch went great; it couldn’t have been any better for us,” Rep. Osceola said. “We made a lot of good contacts of big potential customers around the country – in Russia, Germany, Mexico – and other Tribes who want to be distributors. We will be the only e-cig manufacturer in the country, so when we sign deals, we will be the manufacturer, as well as the wholesaler. This was a great effort by the Board.”

The Board brought the Seminole Unconquered booth and product to the Global Gaming Expo (G2E) in Las Vegas from Oct. 1-4 as well. The event, sponsored by the American Gaming Association, is an international show by and for the gaming industry worldwide.