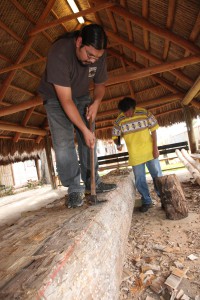 Before roads were built, canoes were the only means of transportation for Seminoles living in the Everglades. Today, canoes are no longer necessary, but they remain a critical aspect of Tribal culture.

According to the Florida Museum of Natural History’s website, the oldest canoes found in North America date back 6,000-7,000 years and were integral for survival of people living near water.

Pedro Zepeda, traditional arts and outreach coordinator at the Ah-Tah-Thi-Ki Museum, wants to keep the Tribal tradition of canoe making alive and has devised an idea that could motivate people to build a canoe of their own. It’s called a canoe journey, and he plans to lead one in the spring, the first in Tribal history. To get the project off the ground, he is spearheading the building of two large canoes: one in Brighton and one in Hollywood.

A canoe journey is a group of people traveling to a distant destination in their canoes. Zepeda was inspired by the Tribes of the Pacific Northwest, who revived their tradition of canoe journeys in 1989. Those Tribes say the true significance is the journey itself, which encompasses spirituality, respect, teamwork and honor.

Zepeda learned about the journeys while at a conference a few years ago and believes it will help preserve the tradition of canoe making within the Seminole Tribe.

“We don’t use canoes in our daily lives anymore, and there isn’t a huge market for them out there,” Zepeda said. “I thought an annual canoe journey would be a great way to promote making and using canoes.”

In the Northwest, canoe journeys have created a renaissance of canoe making by a new generation of Native carvers. Zepeda hopes that with the anticipation of a journey every year, the same can happen here.

The Tribe’s first canoe journey, which Zepeda anticipates will take place in February, will be a 10-mile trip down the Turner River from U.S. 41 to the Smallwood Store in Chokoloskee, which should take about six hours. He hopes about 20-40 people participate.

“I’ve always wanted to take a canoe trip down the waterways our ancestors traveled,” said Bobby Frank, Hollywood Cultural director. “I used to watch Henry John (Billie) carve canoes in Chokoloskee. Now, he’s gone, and the torch is in our hands. It’s our responsibility not to let it go.”

Zepeda is optimistic about the challenge of beginning a new Tribal tradition.

“I think the Tribe will like it,” Zepeda said. “I hope we can continue with this annually and that it grows, like any other festival. When they started the canoe journeys on the Northwest coast, they started very small. Now, they have more than 100 canoes participating every year.”

In fact, more Tribal members are making full-size canoes now than they have in a long time. Zepeda is working with Frank in Hollywood and Lewis Gopher, cultural events specialist, in Brighton on large canoes. The cypress logs, about 20 feet long and 27 inches in diameter each, were recovered from the bottom of the Sampit River in South Carolina. The trees were probably 200-300 years old when they were cut; they sat in the river bottom for maybe 60-100 years, Zepeda said.

To get logs to sawmills in the 19th century meant floating them down a river, which would sometimes create logjams. These trees are the logs that sunk as a result of a logjam more than a century ago.

Cypress is the preferred wood for canoes because the wood contains an oil called cypressene, which acts as a preservative to make the wood resistant to decay and insect infestations. The logs were recovered and dried out before being trucked to the Ah-Tah-Thi-Ki Museum at Big Cypress, a feat in itself. The two waterlogged logs weighed in at 15,000 pounds, Zepeda said, and each had to be moved to Brighton and Hollywood, which entailed the use of flatbed trucks, front-end loaders and large cranes.

In Brighton, students at Pemayetv Emahakv Charter School help Zepeda and Gopher make the canoe a few hours each week. In the process, they learn traditional and modern ways to carve a canoe.

“A lot of lessons go along with making a canoe,” Gopher said. “The students are learning if they keep up the hard work, they can accomplish a lot of things.”

“It takes a lot of patience to do it all by hand,” Frank said. “When it’s done, it’s done. You can’t rush a good thing.”

Zepeda believes there are different ways to carve a canoe.

“It doesn’t bother me to use power tools,” he said. “Hand tools are slower, but you learn other things, too. We aren’t stuck in time, either. Some people think it may be cheating to use power tools, but it is each individual’s choice.”

Gopher believes his ancestors would use power tools if they were still around today.

“My ancestors always kept up with the times,” he said. “If something new came along to help build a chickee, they used it. They would use whatever they had to make the job easier. I believe they are looking down on me and saying, ‘Why wouldn’t you use what is available to you?’”

Either way the canoe is built, the end result is a canoe created from a cypress log by a Tribal member.