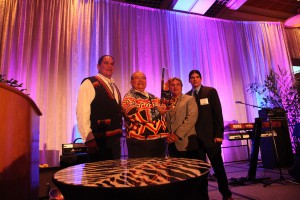 HOLLYWOOD — Indian gaming began with a modest bingo hall on the Hollywood Reservation and has grown into a multi-billion dollar industry. Last year alone, Indian gaming revenue accounted for approximately $27.2 billion nationwide, according to the National Indian Gaming Commission. If not for the farsightedness and perseverance of the Seminole Tribe, Indian casinos would not exist in the U.S.

The Tribe shared their experience and gaming success as they welcomed members of the National Indian Gaming Association (NIGA) to Hollywood for the annual NIGA mid-year conference, held at the Hard Rock Hotel & Casino from Sept. 18-19. About 500 people representing 86 Tribes from 35 states and two Canadian provinces attended the event, more than double the typical turnout for the event. NIGA communications director Michael Woestehoff attributed the turnout to the issue of Internet gaming.

“To the rest of the nations, we’ve always been leaders in gaming and helped start the gaming association in the 1980s,” said Joel M. Frank Sr., the first National Indian Gaming Commissioner. “We went to the Supreme Court…we pushed and pushed and ended up with the right to develop and regulate gaming.”

As an Indian gaming advocacy group established in 1985, NIGA included a variety of seminars during the conference, including federal policy updates on Internet gaming, taxation issues and gaming developments affecting Indian Country, as well as how to protect casinos from fraud, how to market effectively, use of social media and crisis management. The Tribe led panel discussions about success stories in Indian gaming and procurement procedures to encourage companies to do business with the Tribe.

During the session on success stories, John Eder, senior vice president of finance for Seminole Gaming, outlined benefits of gaming for the Tribe.

“The Tribe started Indian gaming in the U.S. but didn’t have a premiere facility,” he said. “They put together this team 10 years ago; all of us had gaming and opening experience. In the 10 years since, cash flow to the Tribe has quadrupled.”

“That money is used for Tribal schools, housing, health care and per capita and pays for 10,000 employees. In addition, gaming has a positive effect on the local economies. What we have done for the Tribe and the community is very fulfilling.”

In addition to the seminars, the conference included a mini-expo with about 20 exhibitors, including the Tribe’s Seminole Pride line of products. They displated beef, orange juice, honey and water. The Tribe also launched a new product, Seminole Unconquered electronic cigarettes.

At the 14th annual Sovereignty Awards Banquet on Sept. 18, President Tony Sanchez Jr. and Frank received the John Kieffer Award. The award recognizes selfless dedication to advancing the lives of Indian people socially and economically, building self-sufficiency through gaming enterprises and advocating for Indian self-determination. The late Kieffer, a member of the Spokane Tribe in Washington, was instrumental in the modern structure of NIGA and dedicated himself to the protection of Indian sovereign rights. In his memory, NIGA chooses honorees dedicated to the organization’s mission and purpose.

“This is an extreme honor,” President Sanchez said. “I just don’t have the words to describe the feeling. I want to add to the legacy that was put into place long before I got here. We have fought for our dream and vision and don’t take sovereignty for granted. I come to work not for the recognition but because I want to be part of the legacy we leave for future generations. I do all I can to lead by example; I believe it is my responsibility to show the younger people how to lead.”

The NIGA Chairman’s Leadership Award was presented to Chairman James E. Billie for his exemplary and historical contributions to the Tribe. The award, which was presented at the luncheon on the last day of the conference, honors individuals who have contributed and advocated for Tribal sovereignty and economic development.

In his acceptance speech, Frank outlined the history of the Tribe’s struggle to assert sovereignty and get gaming legalized on Tribal lands.

“This place, the Hard Rock Hotel, used to be a swamp,” he said. “We used to go fishing and hunting on this very spot. Sometimes that’s where our food came from. In the 1960s, Chairman James Billie ran the Indian Village on these grounds. We were hungry for new ideas; we knew our children needed to be self-reliant.”

High-stakes bingo came into the conversation in the 1970s and was discussed at community meetings, where it was ultimately approved, Frank said in his acceptance speech. In 1979, the Tribe opened the bingo hall on the site of the Hollywood Casino. Years of litigation followed with rulings from the U.S. Supreme Court upholding the Tribe’s immunity from state laws regarding gaming.

“The driving force was sovereignty,” Frank said. “In 1984, five Tribes showed up and created NIGA (a year later). It’s been 27 years since we started, and we are pleased to show off our economic prosperity.”

NIGA, a nonprofit organization of 184 Indian Nations, aims to protect and preserve the general welfare of Tribes striving for self-sufficiency through gaming enterprises. They work with the federal government and Congress to develop sound policies and provide technical assistance and advocacy on gaming-related issues.

At the moment, the hot-button issue in Indian Country and Congress is Internet gaming. Currently, a draft of a bill by Sen. Harry Reid (D-Nevada) and Sen. Jon Kyl (R-Arizona), which would legalize Internet poker in the U.S. while cracking down on Internet gaming, has been released. The bill, which has not yet been introduced to the Senate for a vote, would violate nearly every principle developed by Tribal leadership in the NIGA resolution on federal Internet gaming bills, would harm Indian gaming and would limit Tribal governments from participating in the new industry. NIGA is working diligently to add language to the bill to protect Tribal rights.

Sanchez also represented the Tribe on a panel discussion Oct. 4 at the Global Gaming Expo held in Las Vegas, where he discussed the 25th anniversary of the Indian Gaming Regulatory Act (IGRA). Established Congress in 1988, IGRA governs Tribal gaming nationwide. President Sanchez acknowledged the gaming industry is still evolving and noted the Tribe is continually examining how new technologies can be incorporated into the Tribe’s existing gaming business.

“Tribes have an inherent sovereign right to have Internet gaming,” NIGA Chairman Ernest L. Stevens Jr. said. “We are ready to work until Christmas to get this done.”