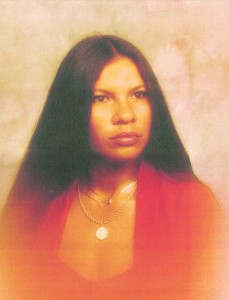 HOLLYWOOD — Wanda Bowers has made a lifetime commitment to being an ambassador of the Seminole Tribe. As a student in the public schools, a past Miss Florida Seminole Princess, an entrepreneur and a program director, she has served her Tribe with pride and respect. She is proud to be Seminole and considers it a privilege to represent her people.

Her Miccosukee/Creek heritage is very important to her, and she has made it a priority in the education of her own children and the young people she influences through her position with the Tribe. Some of her fondest memories are of the time she spent in the Brighton Bird Clan camp of her grandparents, Lena Bowers and Eli Morgan.

Wanda’s father, Casey Bowers, was introduced to cattle ranching at an early age as his family participated in the development of the Seminole cattle industry. Becoming a Christian, the young cowboy traveled with his church to Oklahoma, where he met and married Stella Narcomy, a Creek girl from the Deer Clan from Oklahoma.

Casey found it necessary to supplement his ranching income in order to raise a family. Moving close to work opportunities in Hollywood, he joined the construction industry and became a mason, but his heart was always in Brighton, where he maintained a herd of cattle. Being a cowboy was his first love, and he took his children to the ranch whenever possible.

Wanda Faye Bowers was born on Aug. 28, 1951 in a Fort Lauderdale hospital. Her parents, Casey and Stella Bowers, were living in a small wood-frame structure on the Dania Reservation. She and her brothers, Steven and the late Russell, spent their early years growing up in close proximity to the site of the church and trailer park. Together they watched the development of the Seminole community and were among the first families to occupy the newly constructed permanent housing.

When the Tribe adopted its Constitution in 1957, Wanda was just reaching school age. Only a few Tribal members attended public schools at this time, but the need for education was apparent, and more families were enrolling their children.

“Public school was a difficult transition for many of the kids,” Wanda said. “We were raised within our own community, had little outside interaction and the majority of our parents spoke Mikasuki at home. This created stumbling blocks for many of the students that were difficult to overcome. Teachers pointed out to our parents that it would be beneficial to our comprehension skills if they only spoke English at home, but this was not always the case. Some of the children became discouraged and did not complete school.”

Wanda indicated that this language issue had pros and cons. Her father started only speaking English to his children, and therefore, they grew up with limited knowledge of their language, but it helped them do well in school. Unfortunately, it left them with passive skills in Mikasuki. Native language skills are important to preservation of culture, and she is happy to see the emphasis that the Tribe is placing on teaching Creek and Mikasuki in the schools and culture programs.

“When the other students and coaches recognized that we excelled in sports, it helped us fit into the student body and achieve acceptance,” Wanda said. “With acceptance came more self-confidence and better performance that led to higher attendance and grades. You had to make the grades or you couldn’t play sports, and that became a strong motivator.”

When Connie Gowen became the first Miss Florida Seminole in 1957, it opened a new field of opportunity for young women in the Tribe. With the title came a responsibility to favorably represent the Tribal members and serve as an ambassador. She became a role model to the younger girls and someone they could strive to emulate as they dreamed of some day competing for the crown.

That dream came true for Wanda when she won the coveted titled in 1968 and 1969. Each of the princesses has made her own contributions to the position. Traditional attire and a beaded crown have always distinguished the appearance of the recipient, but the items have undergone transition over the years, and an embroidered sash has been added.

As Miss Florida Seminole, Wanda realized that knowledge of community, culture and history were important factors in adequately representing the Seminole people. She advocated that it is important to know about the problems that exist and to display a positive attitude and pride in your ethnicity.

Following her reign, Wanda married David McCall and accepted one of the most important roles of her life when she became the mother of Christine, Casey and Elliott Levi. She also took in David’s other kids, twins Danielle and David, twins, and Justin McCall, raising them as her own. While she has known much joy and triumph in her life, she has also had to endure her share of tragedies. She lost Casey, Elliott and her husband while they were just beginning to experience life. When David passed, she was left a young widow and single mother. Elliott passed when he was 5, and Casey departed shortly after graduation from high school. Even though these losses have had a profound effect upon her, she has found the strength to continue and cherishes their memories.

Her daughter, Christine, graduated from high school with honors and then followed in her mother’s footsteps as Miss Florida Seminole. She attended Florida State University (FSU), where she earned a bachelor’s degree in social work. As a student at FSU during her reign, she juggled her busy schedule to maintain her high GPA while traveling extensively to meet her commitments. It wasn’t always easy, but she had inherited her mother’s perseverance and did an exceptional job with her mother’s support.

Wanda recognized the potential of the role of Miss Florida Seminole and, after several years, accepted the position of director of the program. Under her guidance, it has developed into an important vehicle for young Tribal women competing for the crown to enhance their skills in a manner that will benefit them in their careers, social lives and personal achievements.

She assessed the relationship of her program with other princess pageants and developed a structure competitive with Miss Indian World. The participants in her curriculum receive instruction in public speaking, appearance, cultural awareness, poise, presentation, talent, social graces, etiquette, history and language. Participants must maintain a GPA of 2.0 or higher, work their trip schedule around exams and carry laptops to complete assignments online.

“We must feel good about ourselves if we are to exhibit a demeanor that will influence how others perceive us,” Wanda said. “This is important on both a personal and Tribal level and will have a positive impact upon our future. As ambassadors, our Seminole royalty has the opportunity to travel and learn about other Native American cultures and tell our story from our perspective.”

Under her guidance, Miss Florida Seminole makes numerous appearances at Seminole Tribal events, Miss Indian World, the Gathering of Nations and FSU and receives a host of invitations to public and Native American activities. Travel opportunities have taken them across the United States, to Canada and on one occasion, to Europe.

“I want to thank the Tribal Council, who have always been very supportive during my annual struggle for a budget, and the local communities, who help to make our program an overwhelming success,” Wanda said. “Their sponsorship makes it possible for us to adequately represent them.”

Wanda could be described as a workaholic as she strives to make use of every available waking hour. As an entrepreneur, she has established her own business, “Wanda’s Seminole She-La-Musk-Kee” (Stuff You Use) with the logo, “The Unconquered Seminole.”

“It all started with a coffee cup,” Wanda said. “I love coffee, and in my daily contacts and travels I have encountered a lot of personalized and promotional cups. Before long I was collecting, and then I decided it was time for the Seminole Tribe to join my collection. After designing that first cup and seeing its potential, my inventory expanded, and the orders started to arrive.”

Wanda promotes the Tribe through her distinctive line of office and promotional items that include flags, pens, stationary, money clips, back packs, event commemoratives and a variety of other resources. She makes creative use of patchwork, Tribal colors and the seals of the Council and Board.