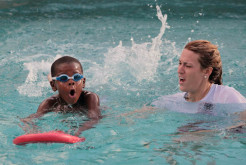 HOLLYWOOD — The Hollywood Reservation pool could be a new hot spot for turning little would-be swimmers into Olympic winners.

The Recreation Department’s recently created swim team, for children ages 4 to 13, gathers Tuesdays and Thursdays from 3:30 to 4:30 p.m. for learning the fundamentals of competitive swimming. The budding swimmers are taught proper strokes and get plenty of chances to race.

“They like the idea of competition,” said Hector Casallas, lifeguard and swimming teacher. “They are more engaged and pay a lot more attention than in regular swim classes.”

About a dozen kids are on the team. The department aims to establish teams on each reservation for inter-Tribal meets. Casallas said he hopes to certify swim instructors as American Red Cross water safety instructors by the end of the year in Brighton and Fort Pierce. Competitions should begin next summer.

Ultimately, Casallas would like Seminole teams to compete against other local recreation swim programs and at Native American competitive games nationwide.

The pool is heated between 85 to 88 degrees for the winter.

To reserve a spot on the team, contact the Hollywood Recreation Department at 954-989-9457.