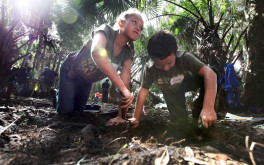 BRIGHTON — Sixth-graders from Pemayetv Emahakv Charter School were introduced to archaeology with a down-to-earth experience in the heart of a Brighton hammock.

“The most fun part was digging in the dirt. We got down, got dirty and discovered stuff,” student Heith Lawrence said.

Led first by bus and then on foot through highland brush by archaeology experts from the Tribal Historic Preservation Office (THPO), 20 children toiled for three hours Dec. 5 at the scene of a pre-reservation European homestead where animal bones, bricks, bullets and pottery were abundant.

“This turns the tables on what people normally expect. Here, we have Tribal children with the ability to uncover and interpret how white people may have lived,” said Tribal archaeologist Maureen Mahoney, who organized and managed the educational project.

A box at one table featured clear plastic evidence bags already filled with found objects collected from professional pre-event surveys of the area. The bags were tagged with necessary notes that provided descriptions, measurements and geographic coordinates where the items were found. One bag, dated Nov. 25, contained an alligator bone collected from the root ball of a palm tree.

At the mapping station, students armed with clipboards and pencils first recorded visual observations of the scene.

“If you look just a few yards away, you can see the short distance to water through the trees and the formation of the island. You can see some areas already excavated and bricks that we can surmise were used for building a structure,” Mahoney said.

THPO site analyst and Brighton resident Jack Chalfont showed students how to gently inspect the bricks without moving them. The bricks were stamped by the Robbins Brick Co., established in Tennessee in 1889, Chalfont said. The company went out of business in the 1930s, according to THPO.

“We found out that a shipment was sent to Okeechobee in the early 1900s, so we’re thinking these bricks probably came from that shipment,” he said.

Chalfont guessed that the white people who lived at the scene were likely evicted just a few years short of 1935 when Brighton formally became an Indian reservation. He said he remembers seeing survey markers dated 1929 on the land about 30 years ago. Chalfont believed the survey was done by the U.S. Army to determine the size of scale of what would become the reservation.

Connecting stories told by Tribal elders with U.S. census reports, Chalfont also believes the land could have been occupied by members of the Curry family, a family documented to have lived in LaBelle and Moore Haven.

Chalfont, whose own family now uses the land for cattle pasture, said his first encounter with archaeologists was disheartening. He was only about 10 years old.

“I basically called them grave robbers,” Chalfont said. “Today is a reversal of the past. We usually had people digging up Indian graves; instead we are letting the children see how black and white life was back then without running water or electricity, and we are teaching them to protect the land.”

At other stations children used spades to dig layers of dirt from pre-determined areas, measuring tapes to record dirt layers, paper and pencils to draw grids and record findings, and hands to sift buckets of soil through screens.

“It’s so cool to try to imagine what happened here,” Jagger said. Later, in his field report, Jagger supposed that the area was a hideout for “someone running from the cops” or maybe the legendary “Wild Bill” Curry himself, according to local lore. He also concluded that the man ate deer and turtles because several buried piles of deer and turtle bones were found.

“There are bullet holes in the trees. There is very old broken glass. And it’s all right in the middle of nowhere,” Jagger said. “About half of my guess is from fact and the other half is my imagination.”

Student Haylie Huff also hypothesized that whoever lived at the site did not want to be found.

“They lived there where no one could find them because they moved in without paying anything,” Haylie wrote.

Indeed, prior research of state records indicates that no one ever applied for homestead at that location, said THPO field technician Karen Brunso.

In classroom lessons at PECS before the outdoor event, Brunso taught students that educated vision plays a big part in deducing how ordinary people lived in the past. Recreating a picture of the past takes studying how communities sheltered, fed, protected and clothed themselves.

“I told them how archaeology can be a kind of storytelling. We tell the tale of everybody. We might not know if it is of a historical person but we fill in the gap. It’s not just the famous people who make history. History is made by everybody,” Brunso said.

Willie Johns, a former THPO outreach coordinator who observed the dig, told the students that he knows the area “like the back of my hand” because he played there as a kid, worked cattle there as a young man and later, as a culture leader, helped survey areas nearby.

Several excavations turned up Army military buttons and artillery indicating that the U.S. Army was there during the Seminole Wars, Johns said. Other sites were determined to be culturally sensitive and were left untouched in reverence to Native ancestors.

“History is a continuous story. It unfolds in different layers,” Johns said. He asked the students if they would take the archaeology dig a step further in the future. “Maybe you can write our history.”