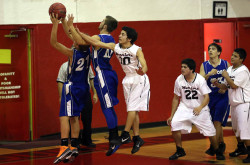 BIG CYPRESS — The Ahfachkee School girls and boys basketball teams share more in common than just playing on the same court at the Herman L. Osceola Gymnasium. This season both squads are in rebuilding mode.

As of the Christmas break, wins had eluded the Warriors’ teams – including a pair of losses at home to Everglades City Dec. 16 – but coaches said encouraging signs abound.

“I like their ability to hustle and their desire to want to play,” said girls coach Shaquille Hall. “They want to be out there playing. Even though they may not be the best, they play together as a team and that’s what team sports are about.”

“They work hard,” coach Brandon Jones said about his boys team. “We don’t have a lot of height, but everybody comes to practice when they are not sick. We play hard. We’ve got a lot of eighth-graders. They don’t quit.”

Case in point came in the third quarter of the boys’ 67-23 loss against Everglades City. Despite the lopsided score, Ahfachkee guard Issiah Alvarado showed plenty of determination. After Alvarado missed a 3-point shot and the ensuing rebound, he sprinted back on defense just in time to knock away a layup attempt.

Ahfachkee spent most of the night firing away from beyond the arc. With a squad that doesn’t have anyone taller than 5-foot-7, getting the ball inside poses a challenge.

“We’ve got shooters,” Jones said, “but we’ve got nobody in the paint that can get down low and bang on the boards.”

Lack of height is only one obstacle the boys team faces this season; they’re also thin on numbers and experience. Jones said the team only had five players for a couple games. He offered an option to forfeit some games, but the players nixed that idea.

Ahfachkee hasn’t been at full strength too often. Against Everglades City, the Warriors were missing a lot of quickness with junior Devon Bowers and seventh-grader Ricky Garza out of the lineup. Jones said both players could be back on the court in the second half of the season. Ahfachkee will start the New Year with a home game against Clewiston Middle Jan. 6.

“I think for the next two years, we’ll be rebuilding,” Jones said. “Once these guys actually get to high school and start getting more confident, I think we’ll be one of those teams to compete with.”

Last year, Jones guided the Ahfachkee girls to its best season ever as the Lady Warriors finished runner-up in their district and qualified for the regional playoffs for the first time. When Jones shifted over to the boys head coaching job this season, Hall took the reins of the girls team.

Hall and Jones know each other from their football connections in Naples. Hall is a 2010 graduate of Palmetto Ridge High School, which is where Jones serves as the running backs coach. Jones coached Hall’s brother, Ron Johnson, who led the University of Connecticut in rushing this season as a freshman.

Hall, who attended Bowling Green State University in Ohio on a football scholarship, said being at the helm of an inexperienced team is a good way to begin his head coaching career.

“It’s good to start with a rebuilding process because I get to grow as a coach, as well as the players get to grow. Some of these girls, it’s their first year playing,” Hall said.

The girls team lost some players from last year’s squad to graduation, while others changed schools or opted not to play this season. This year’s team features seven players. Hall said getting the players focused and sharp has been the biggest challenge.

“Just getting the kids mentally ready because I know physically they’re ready to play,” he said. “Mentally, they have to stay locked in. Their minds kind of wander a bit, but that’s all part of sports.”

Eyanna Billie led the team with six points in a 47-10 loss against Everglades City. Liberty Robbins and Carlee Billie each had two points.