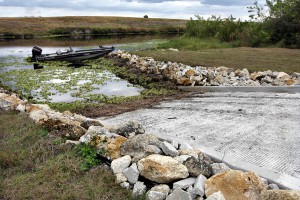 BIG CYPRESS —Bass, snook, catfish, you name it. If a fish swims in the Everglades, it’s as good as dinner on the Big Cypress Reservation.

“I’d eat (fish) all day long, especially if grandma made it,” said Big Cypress Councilman’s assistant Wovoka Tommie. Tommie said he could also fish all day long, typically hooking 5- to 6-pound catches out of a secret fishing hole deep off the fringe of cattle land owned by Agnes Cypress.

“We grew up fishing and hunting out here. It’s part of our pastime,” Tommie said. “But if there is a ‘honey hole,’ you don’t talk about it.”

On Dec. 5 at a ribbon cutting for the newly constructed concrete and rock-edged Agnes Cypress Boat Ramp, access to the best kept secret at the end of Huff Bridge Road was made easier to get to and was opened for the asking.

Only Tribal members are permitted to use the ramp, which is secured behind a locked chain-link fence. A key to the lock is available only as requested through the Seminole Police Department.

Tommie said Agnes Cypress donated the land for the ramp, which her son Shane Cypress suggested to Tribal leaders two years ago. The $43,000 project took two years to complete from idea to approval, funding, land clearing and construction.

Agnes Cypress was unable to attend the opening ceremony because of illness and Shane Cypress was called away to help another Tribal member, but Agnes Cypress’ daughter Jeannette Cypress, director of the Big Cypress Traditional Preservation Department, spoke for her brother and mother.

“My brother wanted to give back to the community, and my mother was grateful for so much in her own life that she was happy to give the land. Both told me to tell everyone, ‘Thank you,’” she said.

Big Cypress Councilman Mondo Tiger said he was fortunate to have spent much of his youth also fishing off the land when it was hush-hush from many other people.

Then, the natural brush was thick and the land wet. Boys (and some men who spied to find the place) had to trek around 3-foot-deep marsh to launch flat-bottomed jon boats off the bank that, from years of discreet use, made a good enough slide into the water.

“Now, whenever a Tribal member donates land to the community, it means that we are all fortunate to use it,” Councilman Tiger said.

Big Cypress Board Rep. Joe Frank agreed – with a bit of pretend hesitation.

“We all grew up here fishing. We’d come out with a cane pole and whatever grasshoppers we could get,” he said. “I hope more fishermen come out here to fish, and I hope they don’t catch anything and leave all the fish for me.”