Skip to content
You are here
Home > Community > Seminole Unconquered electronic cigarettes will be first made in U.S. 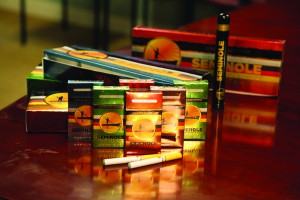 HOLLYWOOD — The electronic cigarette industry is poised to become big business, and the Seminole Unconquered brand is preparing to be a significant player in the field.

“This is going to be life-changing,” President Tony Sanchez Jr. said. “For me, this is about the humanitarian side; we will affect the world.”

Tobacco-related illnesses kill nearly 6 million people every year worldwide, according to the World Health Organization. The Campaign for Tobacco-Free Kids reported that about 400,000 Americans die from tobacco use annually.

The Tribe is currently looking into building a manufacturing plant in Broward County. Virtually all electronic cigarettes are made in China, so the Tribe’s plant will be the first on U.S. soil, said John Cameron, CEO of Safecig. In addition, Gaming recently passed a new policy that allows electronic cigarettes in all non-smoking rooms at the casinos, Hollywood Board Rep. Chris Osceola said.

The Tribe partnered with Safecig to produce the brand. In addition to Seminole Unconquered, the Tribe will seek out other businesses that want their own brand or private label and produce those as well. Examples include sports teams, businesses and hotels. The Tribe will manufacture all private-label brands.

Cameron, who hasn’t had a tobacco cigarette since January 2011, feels like an anchor was taken off him when he started smoking electronic cigarettes. He no longer smells like smoke nor does he wake up in the middle of the night to smoke.

Electronic cigarettes provide nicotine without any harmful, carcinogenic chemicals. The ingredients are vaporizing fluid, distilled water, natural flavors, essential oils and nicotine, all of which are approved for human consumption. In addition, they mimic the physical act of smoking for the user.

“Electronic cigarettes are like having a cell phone connected to a donut,” Cameron said. “They are electronic devices you consume.”

“There is going to be a revolution in what people smoke,” Cameron said. “We will impact more humans than penicillin did.”

The Tribe plans a national launch of the product next year. Seminole Unconquered electronic cigarettes will be widely available at stores, smoke shops and casinos. They are currently available online at www.seminolecig.com. Once the brand is launched, a national marketing campaign will follow.

“We have to tell the world about it,” President Sanchez said. “It can’t be the world’s best kept secret.”