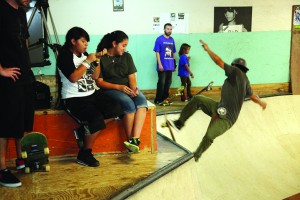 POMPANO BEACH — Alexander Blaine Cypress lived a short, but memorable life. Alex, who passed away unexpectedly in May at 21 years old from pneumonia, loved extreme sports and competed often in skateboarding contests. In his memory, his mother and aunts started the ABC Foundation to provide scholarships to other kids who are part of the extreme sports culture.

Alex spent much of his youth on the Pine Ridge Reservation in South Dakota with his mother, Bobbi “BJ” Billie.

“Alex was a guy who would give you the shirt off his back,” BJ said. “He was family oriented; we were always a very close-knit family. If I didn’t know where he was, one of his aunties did. He was very proud to say he was a Seminole, he went to the Corn Dance, and his hero was his grandpa. His first tattoo was a mural of my dad (Chairman James E. Billie) wrestling a gator.”

The foundation sponsored the Alexander Blaine Cypress Memorial Skate Contest at the Circus Bowl skate park in Pompano Beach on Dec. 1. About 85 people came to watch 22 competitors, including a few Tribal youngsters, take their turns doing tricks on their skateboards. The family donated the prize money: $200 for the intermediate category and $300 for advanced skateboarders.

“We needed to show love and share memories of my nephew,” said Tommi Billie, Alex’s aunt. “This is what he loved to do. He taught all our children how to skate, and that’s how they remember him.”

ABC Foundation will award scholarships of $5,000-$10,000 to high school seniors in Broward County public schools who are involved in extreme sports. Both Tribal and non-Tribal students can qualify for the scholarships. Because most scholarships are given to kids in traditional sports, this will fill a niche that was previously unaddressed.

“Alex skated all the time, but I never saw him compete,” said Edna Bowers, his great aunt. “I wish I did; I would have filmed it. He never told us when he was competing; he would just go do it.”

Those who couldn’t fit inside the compact viewing area of the Circus Bowl gathered under the tent outside to watch the action on a large flat-screen monitor. Musicians played outside, kids practiced their best skating moves in the parking lot, and people purchased T-shirts commemorating the event.

Alex left a 9-month-old daughter, Marilyn Annah-belle Cypress, who was born a month premature. BJ believes she was born early so she could see her father, who passed away one month later.

“He wasn’t a traditional guy, but he always stayed with us,” BJ said. “Every morning, he would ask if I was awake and say, ‘I love you.’ I don’t get my morning ‘I love you’ anymore.”