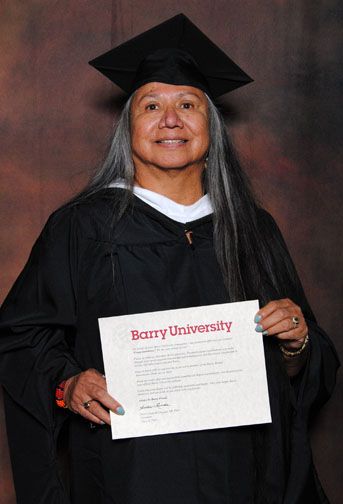 MIAMI — At 64, Agnes Motlow isn’t close to slowing down. The Hollywood resident earned her Master of Arts in administration from Barry University May 9 and is applying for a doctorate in organizational leadership.

Motlow completed the degree while working as executive assistant to General Counsel Jim Shore and caring for her late husband, David Motlow Sr.

“David was a real advocate for education and always wanted me to continue,” Motlow said. “After he got really ill, I saw my grades slip because I couldn’t concentrate. I worked at his bedside on my computer while he was in the hospital.”

Motlow earned her bachelor’s degree from Barry University in 2011 and began her master’s degree in 2012. It took her a year longer than anticipated to complete the program, but she received her diploma during graduation with her son, daughter-in-law, granddaughters and sister in attendance.

“I’m really proud that I was able to do this. I challenged myself to complete it and I did,” Motlow said. “I saw my granddaughters’ shiny eyes as I walked down to get my diploma. I want them to have positive role models. If they see grandma doing this, then they know they can do it. Age is no barrier.”

Her classes focused on leadership, administration, communication and teamwork; all valuable attributes for a management position in the workplace. A requirement for earning her master’s degree was completing a capstone, a detailed project in which students take what they learned during the graduate program and apply it to examine a specific idea.

Motlow’s 30-page capstone project explored mentorship of Tribe members in tribal government for administrative positions. She surveyed college graduates and learned they all thought they could perform the job if they had the chance to learn how. She said she was thrilled to have earned an ‘A’ for the project.

“I’ve always felt that we needed more of a Tribal member presence in the administration of tribal programs,” she said. “We should advocate for young people to get their degrees and we, as a government, need to provide positions for them when they graduate.”

Motlow believes when students graduate from college, they should have the opportunity to work underneath a department director to learn what the position entails. She believes the Tribe has the resources to identify graduates who might be interested in pursuing an administrative career within the Tribe.

“When you come out of college you don’t have the skills or experience that’s needed,” she said. “But you do have passion. In this day and age, jobs are hard to find that you have passion for.”

Motlow loves her job – she’s held the executive assistant position since 1989 – and enjoys serving the Tribe. She isn’t sure where her degree will lead her, but she is thankful for the opportunity to pursue education.

“You’re never too old to learn,” Motlow said. “Every day’s a learning experience.”