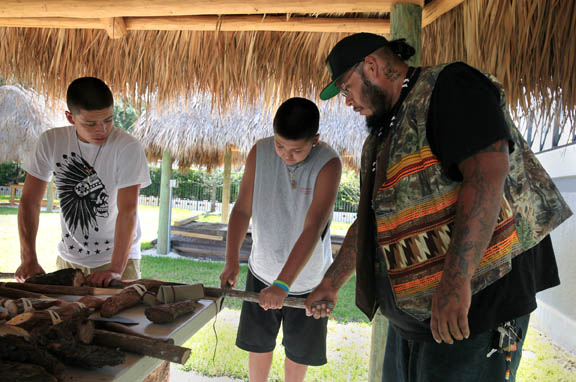 A small contingent of Lummi Nation teens traversed the country to participate in a cultural exchange with the Seminole Tribe from June 15-19.

The 10 teens, all residents of a group home on the Lummi Reservation west of Bellingham, Washington, toured Billie Swamp Safari and the Ah-Tah-Thi-Ki Museum in Big Cypress, learned about Seminole culture in Hollywood, dined with Chairman James E. Billie at the Hard Rock Café and enjoyed a day at the beach before heading home filled with enthusiasm for culture.

“It’s all about sharing knowledge about who we are and what we do,” said Bobby Frank, Hollywood Community Culture center manager. “You take what you learn from the elders and pass it on; that’s what we do.”

The Lummi youth have traveled to New York, Washington, D.C., Hawaii, Oregon and California for cultural exchange trips, but this was their first foray into Florida.

“Some of the kids have always wanted to come to Florida, so they reached out to us,” said Trishanna Storm, executive assistant to Chairman Billie. “They wanted to see the Everglades and alligators, so we thought Billie Swamp Safari would be a wonderful experience. Afterward, the Museum gave them the history of the Seminoles.”

In Hollywood, they were introduced to Seminole culture through crafts and food. Girls made pumpkin frybread and Seminole doll pins from palm fiber and beads, while boys crafted tomahawks from cypress branches and knees.

Madeline Benard, who works with children in the Community Culture Department, explained the matriarchal clan structure of the Tribe.

“You can’t marry in your same clan,” she said. “A woman’s role is to pass the clan to her children. You have to keep with your tradition; without it you’re nothing.”

The Lummi and Seminole women enjoyed an easy camaraderie in the culture room. They shared stories about their Tribes and traditions as they fashioned dolls. The Lummi teens discussed going into the woods to collect bark from the cedar trees, which they use to weave hats, baskets, rope and fishing nets; they use the wood to make canoes and totem poles.

“Girls will bead and make cedar hats, but men do more work with cedar than girls,” said Eliza Julius, 13. “Women make a lot of beaded jewelry, regalia and moccasins.”

The Lummi boys gathered under a chickee as Morgan Frank taught them about the cypress trees and knees they would use to make tomahawks. He let them strip leaves from small branches and cut wood for handles.

“When you make something, you give it away,” said Frank, who has given most of his creations to family members.

While the boys stripped bark and created sharp edges on tomahawk heads with a two-handled draw blade, Frank sharpened another blade vigorously. He instructed them to use their back muscles when pulling the draw blade, not just their arms.

“My brother used to tell me if you are afraid of a blade, it will cut you,” he said. “You have to respect it.”

Simultaneously, girls made pumpkin frybread in the cooking chickee. Lined up at the work table, they learned that if they worked the dough too much it would make the bread tough. Most had never made frybread over an open fire; Lummi women make it indoors.

As they kneaded bread, the girls shared recipes for their own versions; Benard shared the Seminole’s version of Indian burgers. The group then enjoyed a lunch of Indian tacos, while Gordon “Ollie” Wareham shared a few Seminole legends with the teens.

“It seems like the Seminole Tribe has a lot of interesting ways of life,” said Elijah Wilson, 14. “Chickees are great, but they wouldn’t do any good for us; we have longhouses with fire pits inside.”

The teens were impressed by the Tribe’s effort to maintain its culture. The Museum exhibit of student crafts from Pemayetv Emahakv Charter School resonated with the Lummi youth.

“It’s great that a lot of the Seminoles still know their language and how involved they keep their kids in the culture,” said Cecelia Lawrence, 16. “It’s amazing how talented the kids are at that young age.”

Several kids said their Tribe is losing its culture and the visit motivated them to learn more about their heritage when they return home.

“We never stop learning, no matter how old you are, and you share it,” Bobby Frank said. “That’s the beauty of it.”