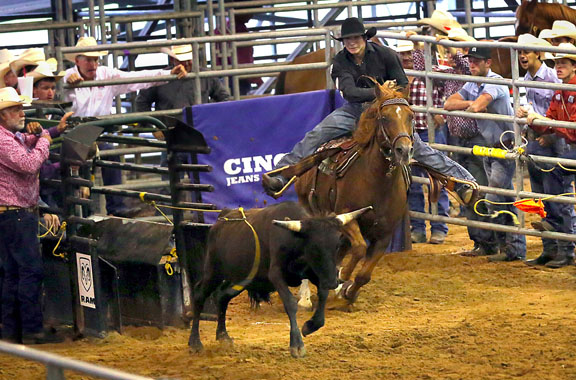 In the first round June 11, nobody was faster in team roping than Jumper and his partner. And nobody all season in the FHSRA produced a faster time in steer wrestling than Hyatt on the first night at states.

Those strong runs proved to be a precursor for day two as Johns earned his time in the spotlight with a memorable victory in tie-down calf roping.

There was a good reason why his blistering time of 7.2 seconds evoked the loudest cheers of the night from the spectators at the Okeechobee County Agri-Civic Center. Johns, 16, shattered the season’s previous best time by nearly a full second. FHSRA President Paul Albert said Johns’ time was the fastest in at least the past four years, and perhaps the fastest ever in the association.

Albert said record books, per se, are not kept by the association, but he researched and didn’t see a faster mark.

“I can’t find anything that says there is a faster time than 7.2,” Albert said. “It’s extremely fast. When you get below 8, that is unbelievable; everything has to be perfect. From start to finish, it was absolutely perfect.”

Wearing jeans, a black shirt and a black cowboy hat, Johns roped and tied up the calf in about as long as it takes to read this sentence.

“My game plan was to make sure I caught him around the neck,” Johns said. “I didn’t think I was going to be that fast. I knew I had a good calf, and I knew I could make a good run on him.”

Johns, the son of Tara and Billy Joe Johns, aspires to follow in his dad’s footsteps and rodeo professionally.

Johns’ performance at states came after he won All-Around Cowboy honors for May. For the season, he finished third overall in tie-down calf roping and qualified for the National High School Finals Rodeo from July 12-18 in Rock Springs, Wyoming. He also qualified in steer wrestling.

Although his specialty is calf roping, Johns came within a whisker of being the state champion in steer wrestling, but that honor went to Hyatt, who lives with the Johns family in Lake Placid.

“He’s like my brother,” Johns said. “He’s lived with me for three years. He came down from Alabama, which is where I grew up. I met him in junior rodeo and we’ve been best friends ever since.”

Hyatt decided to leave Alabama in order to pursue his rodeo career.

“There’s a lot more rodeos in Florida than there is in Alabama,” Hyatt said.

Hyatt set a high bar in steer wrestling at states that wouldn’t be touched when he posted a sizzling first round time of 3.6, more than 1.5 seconds ahead of that round’s runner-up.

At 6-foot-3, Hyatt was among the taller riders at states but still an inch or two shorter than Jumper, a state champion from another sport.

After he and his brother Andre finished their football season on American Heritage School’s Class 5A state championship team last winter, Jumper shifted his attention to the high school rodeo season.

He joined Amery Bass, of Moore Haven, for the duo’s first season of team roping. They barely missed out on qualifying for nationals, but they nailed the first round at states with a victory in 8.3 seconds, more than four seconds faster than the runner-up team.

Because team roping is one of the last events, Jumper waited patiently for hours before he and his horse competed. He said the FHSRA is a good place to hang out.

Jumper, Johns and Hyatt are headed into their senior years of high school. All three plan to attend college.

Jumper, the son of Andrea and Josh Jumper, wouldn’t mind if his college plans include football and/or rodeo.

“I would like to do [rodeo] in college, but if I can get a chance to play football in college, I would most definitely do that,” he said.

Jumper’s 6-foot-5 frame could help him attract interest from college football teams. He said he’s received some interest from major colleges, but no offers yet.

He’ll likely be a defensive end this season and continue to handle long snapper duties. He plans to bulk up from his current 190 pounds.

Johns wants to learn more about ranch management. His family owns a cattle ranch in Brighton. He said he’d like to attend college in Texas or Oklahoma before turning pro.

Hyatt, the son of Alicia and Mike Hyatt, said he aims to rodeo in college, preferably on a scholarship. He has his sights set on schools in the Southwest or West.

“I just spent a week in Texas and I loved it,” Hyatt said.

In addition to FHSRA, the trio also competes in the Eastern Indian Rodeo Association with aspirations of reaching the Indian National Finals Rodeo in Las Vegas this fall.

Come mid-July, the focus for Johns and Hyatt, who are home-schooled, will be on the national high school finals.

Johns knows what to expect. He competed at nationals as a freshman and sophomore.

“You’ve got to step up your game there and show them what you’ve got,” he said.