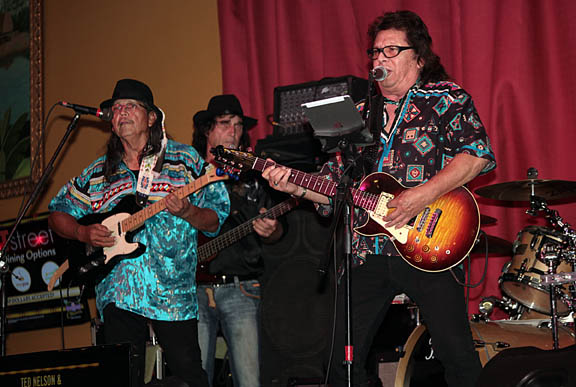 HOLLYWOOD — Musicians Ted Nelson, of Hollywood Reservation, and Lee Tiger, of the Miccosukee Tribe, are determined to crush the stereotype of Native American music and elevate its presence in the industry.

The two, recently off of a two-show gig at the Seminole Casino Classic in Hollywood, will triple bill July 17 with The Osceola Brothers at the Hard Rock Café in the Hard Rock Hotel & Casino Hollywood.

“We want to have Seminole and Native American bands represented around the nation and the world,” Nelson said. “Music keeps us going as a people.”

Both want to kick off a series of showcase events that could catapult emerging Native performers into the national spotlight. Eventually, they envision hosting regularly scheduled Indian Night at the Hard Rock that could attract artists from across Indian Country.

“We want to make a pathway so other indigenous people can have a better chance,” Tiger said.

Tiger acknowledged Gloria Estefan for blazing trails in the 1980s for Latin American artists and he credited the Berry Gordy Motown era of three decades prior for propelling African American artists to the tops of charts.

“But we’ve never seen an effort by a Native American … there’s not been a record company or promoter to bring through Native American talent,” Tiger said. “There is no Berry Gordy in Indian Country.”

Though Tiger has nine CDs to his credit from his 30-year career in the Tiger Tiger band with brother Stephen Tiger, the band’s best chance at stardom came from performing at the first Miami Pop Festival with Jimi Hendrix, Frank Zappa and the Mothers of Invention, and other bands of the day. Lee Tiger said the band was asked to sign with famed producer Larry Kerchner, but at the time it was under contract with another company.

“We missed a few more shots after that, but we kept on playing,” Lee Tiger said. Through their career, the Tiger brothers opened for some of the greatest rock ‘n’ roll bands.

Ted Nelson and the Tee Pee Creepers band has been playing reservation-based gigs since 2008. His brother, Earl Nelson, and Joe Dan Osceola were the organizers of the Big Rock Pow Wow of 1969 that featured Tiger Tiger along with the Grateful Dead, Johnny Winter, Muddy Waters and others.

Though the band boasts its strength in country rock music, Nelson said his Native American influences come through.

“My writing is influenced by Seminole life, love songs, tradition,” Nelson said. “But we are transcending generations and breaking down stereotypes.”

For example, Tiger Tiger’s 1996 release “Land Lords” opens with wind effects then moves into chants within a steady heartbeat rhythm – all the while keeping the hallmarks of rock ‘n’ roll persistent. The song’s lyrics drive the Native message home: “You build a house that is not your own, you’ve taken everything and call it home … the battle is never over for the Land Lord.”

Nelson and Tiger hope to help bring artists who identify themselves as Native artists to the mainstream by giving them a chance to perform at venues that cater to diverse audiences.

“We’re at the cutting edge of this community coming together,” Tiger said.

Surely, Native American music artists have made a mark in the mainstream for many years, but not as identified Natives. It is not common knowledge that Jimi Hendrix and Elvis Presley were both part Cherokee. Redbone, of 1970s fame, though dressed in Plains clothing and wearing long hair, fit in with the hippie scene and named itself for the Cajun term that means “half-breed.”

In modern music, Joey Belladona, of the thrash punk band Anthrax, is Iroquois; and rapper Taboo, of the Black Eyed Peas, is Shoshone from his mother’s side.

Nelson and Tiger seek to bring proud Native performers who purposely infuse and promote Native roots into their work into the spotlight and off the reservation.

Still, listed at No. 1 of 20 Native music artists by Ranker.com is the techno electric band A Tribe Called Red that rages with pow-wow drums, jingles and vocals.

Meanwhile, the band Indigenous, second on the list, mixes pure rock, soul and blues with subtle hints of their Nakota roots. And yet, Indian Calling, coming in third with mellow flutes and chants, might fall within the realm of “mystic earth music.”

“Like most other Indian people who get involved with tradition and culture, it’s like that. We’re doing it in the ‘good way;’ our way keeps to that,” Nelson said.