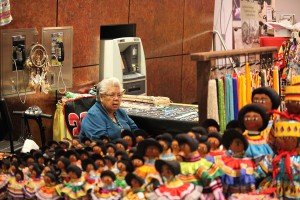 HOLLYWOOD — They come from all across the country – and even beyond. They pack pieces of their hearts, their histories, their cultures. And they showcase it all once a year at the Seminole Tribal Fair.

Vendors and their booths have been Tribal Fair staples since the event began, back in 1971. They aim to showcase their traditional, handmade goods and, of course, make a buck or two.

“The general public doesn’t realize what Tribes are capable of producing,” Sayen said. “They’re beautiful items, but they don’t realize how these things are made by the hands of these people.”

Sayen has been involved in the fair since 1984. She remembers selling frybread in the ‘80s to raise money for the fair and participating in parades across the state, from Plantation to St. Augustine to Tallahassee, to advertise the fair. She remembers the days before Hollywood’s Seminole Hard Rock Hotel & Casino was erected on the fairgrounds in 2004, back before vendors were funneled inside the hallways and back portion of Hard Rock Live.

And she remembers when the Tribal Fair Pow-Wow was in full swing, before it was discontinued because of the cost of prize money.

“It used to be the biggest event of the year,” Sayen said. “It kind of lost its luster for a while, but we’re trying to bring it back.”

Through the years, in the midst of change, one thing has stayed the same – its loyal vendors.
In addition to making sales and showcasing their artistry, the fair has become somewhat of a reunion for these vendors who return year after year.

“It’s just an enjoyable time visiting with the other Tribes that are here,” Sayen said.

Tribes from different regions came together to sell their proud handiwork this year, including the Cree Nation from Canada; Apaches and Navajos from New Mexico and Arizona; Mohawks from New York; Wompanoag from New England; Cherokees from North Carolina; and Southern Utes from Colorado.

“Each Tribe brings their own unique arts and crafts,” Sayen said.

Sayen’s friend and fellow vendor Cideahzah Pinnecoose came from Oregon, representing the Southern Ute and Jicarilla Apache Tribes. Her family has set up a booth at the fair since 1984. Her mother used to make Pendleton coats, and her brother, Malvin, made beadwork and hides before he passed away. Now, Pinnecoose continues to represent her family’s handiwork at the fair – she is known for her intricate beading. She makes watches and bracelets, necklaces and medallions, and she treasures the time she spends socializing with other vendors. 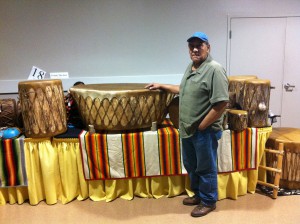 “I love the people,” she said.

Osceola has been a Tribal Fair vendor for about 30 years, selling dolls, skirts, shirts, hats, aprons, pillows, beaded bracelets, necklaces, earrings, barrettes – you name it. Although she sells her handiwork year-round, the Tribal Fair brings in her most successful sales of the year.

She said Tribal members make up most of her customer base because they appreciate her work and understand the prices. Many people outside Indian Country think the prices are high because they don’t know the hours of tedious work that went into making the items, she said.

Osceola’s mother taught her how to sew by hand and later by machine.

“Today, it’s a lot easier, a lot faster (with the electric sewing machine),” she said.

Osceola has certainly passed forward her knowledge and skill. She taught her great-granddaughter and nieces how to sew and make patchwork, and she teaches classes to youth with her sister, Maggie, for the Head Start afterschool program on the Hollywood Reservation.

Osceola is most proud of the men’s traditional Tribal shirts she has made for prominent Tribal leaders like former Chairman Mitchell Cypress and current Chairman James E. Billie.

“I like to see when [the Chairman] wears it,” Osceola said.

She said it’s important for Tribal members to continue wearing tradition Tribal gear to preserve the history. “That way people know who you are,” she said. “That’s all we wore a long time ago.”

Every year, new vendors come to Tribal Fair, adding their own touch to the list of sellers.

Frank Mirabal, of the Taos Pueblo, for example, traveled from New Mexico to sell his buckskin drums for the first time.

“A lot of vendors talk about [the Tribal Fair],” he said. So he wanted to see for himself what it was all about.

Vendor coordinator Sayen hopes to increase vendor participation next year with more Natives like Mirabal coming out to see what it’s all about.

“It’s something that our people enjoy doing,” Sayen said. “It’s our pride.”