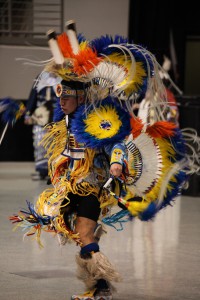 HOLLYWOOD — A dose of tradition, culture and fun summed up the 41st annual Tribal Fair.

Tribal citizens and special guests came together from Feb. 10-12 at Hollywood’s Paradise Live for the festivities.

The tried-and-true formula brought back music and dance performances; authentic, Native apparel and merchandise; live animal shows; and other entertainment.

“Our heritage and culture was on display, and we only get one chance per year to do this,” Hollywood Tribal Council Rep. Marcellus Osceola Jr. said. “We got to educate the visitors the best we could. Hopefully, we touched everybody and gave them something to take away.”

“Our main focus and challenge was and has been the advertising and turnout for it,” Tribal citizen and co-program scheduler Leoma Poore said.

This year, the Tribe publicized the event in a special way, partnering with Mobile Mike – Advertising and Promotions, who broadcasted information about the Tribal Fair on several Clear Channel radio stations.

For the first time, Mobile Mike also kicked-off Tribal Fair weekend with a promotional event at the Hollywood Trading Post in the early morning hours on Feb. 10.

The event featured free car washes, gas, T-shirts and Seminole orange juice and lemonade.
Seminole Tribe President Tony Sanchez Jr. and other Board representatives stopped by to say hello.
Spectators gaped at an exciting, live animal show held in the middle of the gas station, featuring an alligator, an albino rattle snake and a snapping turtle.

“The Seminole Tribe of Florida has global reach and local reach,” Mobile Mike said. “A lot of people don’t know what the Tribe is. They educate people.”

At the Hard Rock Live, several Tribal performers made their way to the stage to perform throughout the weekend, including Paul Buster and Cowbone Band; RC North and Hybiskus; Ted Nelson Sr. and the Fried Yaat-Hutkee Band; and the Osceola Brothers Band.

Miss Indian Nations Shanoa Pinkham came for her first visit to Seminole Country and the Sunshine State.
“It was very beautiful,” Pinkham said. “It was a great honor to be there. [The Seminoles] take a lot of pride in their leaders and their youth.”

“I was also very impressed with their regalia and how it’s completely different than my own Tribe,” Pinkham said. “It’s great to see cultures still thriving and being diverse.”

Emcee Lawrence Baker has spent more than a decade with the Tribe. He hails from the Hidatsa-Mandan Tribe of Fort Berthold in New Town, N.D.

He said that this year’s festivities emphasized diversity among the dancers and their styles.

“I enjoy the crowds each year and touching those people that didn’t have an understanding of us before they came,” Baker said. “There is always still that surprise that we are still here. We are alive and are still relevant…We are so much more than what’s in a book.”

Guests Jan Lenartowicz, of Jupiter, and Jonathan and Meagan Pace, of Plantation, were happy to take in the festivities for the first time.

“I heard about it through family and researching it on the Internet,” Lenartowicz said. “The quality of the (vendors’) craftsmanship was great to see. There was also such diversity in all the activities adults and children could enjoy.”

“It was all something different, and it was all interesting,” Meagan Pace said. “We didn’t have any plans for the weekend, so it worked out to just come and check it all out.”

Kathryn Stolarz contributed to this article.