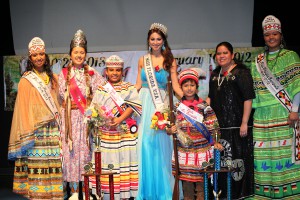 HOLLYWOOD — Among the dozens to sign up, only two were chosen to represent the Tribe as royalty on Feb. 10.

A new batch of close to 50 female and male candidates vied for the popular, year-long positions of Little Mr. and Miss Florida Seminole. The Paradise Theater hosted the event in conjunction with the annual Tribal Fair.

“Each year, we do this and it seems to go smoother,” said longtime Princess Committee Chairwoman Wanda Bowers. “I have maintained my staff also, and they just know what to do.”

Emceed by former Miss Florida Seminole Christine McCall, the main event involved the usual question-and-answer period while judges looked for spunk and a winning personality for the 5-7-year-old winners.

“It’s gotten so much easier over the years dealing with the more outgoing children, and this is something we definitely look for each year when selecting our representatives,” Bowers said.

This year, Tribal youths Jordan Osceola, of Immokalee, and Vincenzo Osceola, of Hollywood, claimed top honors, taking the titles from Brooke Yescas and Caleb Burton. Both Yescas and Burton were short and sweet in their goodbyes as they addressed their families and supporters.

“I would like to thank my mom and parents and Wanda and say great job,” Yescas said.

“It was fun and great, and good luck to the next group of winners,” Burton said.

Perseverance was the key for Jordan Osceola, the new Little Miss Seminole who came in as second runner-up last year.

“The whole pageant was awesome. I really looked forward to it all,” Jordan Osceola said. “I feel great and confident…It all feels great and my heart won’t stop pounding.”

Proud mother Geraldine Osceola said her daughter was determined to win this year.

“I’m so excited and shocked. It is still settling in,” she said.

The newly crowned Little Mr. Seminole Vincenzo Osceola said he will spread the word about his new position.

“I’m going to tell all my friends about it,” Vincenzo said. “I feel great.”

“I’m really happy for him,” Samuel Osceola said. “His mother has been working really hard with him.”

Tribal grandmother Diane Cypress supported grandson Brandon Cypress as a Little Mr. contestant and said this type of competition can teach the Tribe’s future leaders on many levels.

“I think it’s important that he continue to learn how to present himself in the communities,” Cypress said. “This competition helped him.”

Two-time contest judge and current Miss Florida USA Karina Brez said it was a privilege to be back.

“I represent the State of Florida, and the Seminoles are a big part of that,” Brez said. “They are a strong Tribe, and I wouldn’t have wanted to be anywhere else but there to represent them and the State. You get to see these kids from a young age learn and represent their Tribe, which is great.”