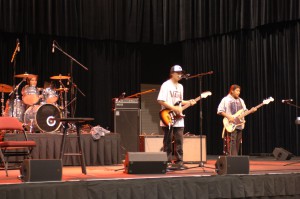 HOLLYWOOD — The group known as the Osceola Brothers Band, led by Cameron, 15, and backed by Tyson, 13, and Sheldon, 10, is explosive. The Hollywood natives rocked their last show, which was at the Tribal Fair, leaving audience members screaming for more. After a few encores, they were completely out of songs for the day’s set.

After picking up a guitar for the first time at 9 years old, singer and guitarist Cameron began to learn how to play at the Boys & Girls Club on the Hollywood Reservation. A short time later, he received a bass guitar and a drum set as gifts – on two separate occasions – and began teaching his younger brothers: Sheldon on the drums and Tyson on the bass. Even their youngest brother, Theron, who is 7, is learning how to play.

Their first show was Paul Buster’s Memorial in October 2011. They opened with a cover of Purple Haze, made famous by Jimi Hendrix. The entire band agreed it was nerve wrecking, but with little mistakes, they put on a good show.

Now, Cameron writes his own material that he will record onto a record demo with the help of Chairman James E. Billie.

At the Tribal Fair, the audience got a taste of their upcoming demo from a song titled No Sunshine.
Until the demo is released, no other sneak peeks are available. However, you can get a view of the singer and guitarist performing at the Youth Beach Bonanza on YouTube.

With six shows under their belt, the musically inclined young men are on their way to the top, only being invited to play live shows.

With a unique rock/blues sound, they hit the stage with a style similar to Joe Bonamassa, B.B. King, Stevie Ray Vaughan and Derek Miller.

The Osceola Brothers Band got to meet Miller after they performed at the Tribal Fair.

Cameron is considering a career in music, while his younger brothers are keeping their musical talents as a hobby.

Their mother, Tammy Osceola, who supports them fully, said, “Do what you like, as long as you get good grades.”

With an A/B Honor Roll record for Tyson and President’s Honor Roll for Sheldon and Cameron, anything is possible for these young, upcoming celebrities.

“We just want to make people feel good with our music,” Cameron said. Sticking to that motto will help their hopes of becoming well known and recognized a reality. Already, they are gaining a strong fan base, with their uncles in full support, as well as non-family members.

Their advice for fellow Tribal youth: have fun in life, learn and, of course, STAY IN SCHOOL.