Sean Snyder and Adrian Matthias Stevens have been dancing since they could walk; Snyder is a men’s fancy dancer and Stevens is a grass dancer. 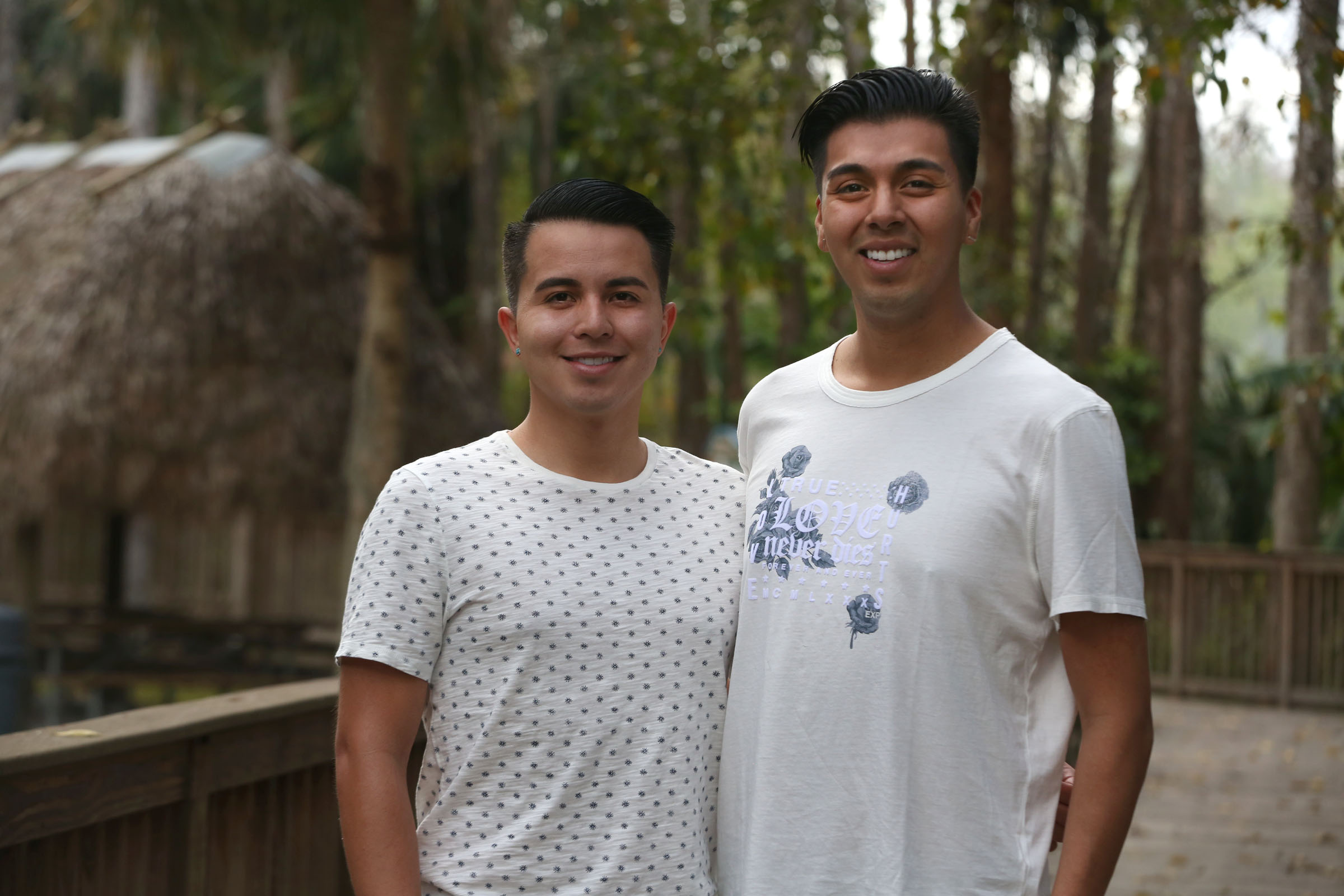 “We are both just natural dancers,” said Stevens, who is Northern Ute, Shoshone-Bannock and San Carlos Apache. “We were raised in the pow wow world and people know our values and traditions. They watched us grow up and watched over us.”

The couple put together a winning routine using both dance styles and came in second in the Sweetheart’s Special Feb. 10 at the Seminole Tribal Fair and Pow Wow. Snyder and Stevens were well-received by the audience and other dancers.

“It’s kind of like a redemption for us,” Stevens said, referring to the last pow wow in which they competed.

Salt Lake City residents Snyder and Stevens were disqualified for being a same sex couple when they danced in the Sweetheart’s Special at the San Manuel Band of Mission Indians pow wow in October 2017 in San Bernardino, California.

“There were three groups of about a dozen couples each,” Stevens said. “The couples that were there were so excited for us, wanted us out there and supported us. The committee wasn’t as progressive as the rest of California.”

“It was a difficult situation,” added Snyder, who is Navajo and Southern Ute. “We went out and competed and we weren’t part of the finalists. We knew we could do better, but we didn’t know we were disqualified. A reporter from powwows.com interviewed us. The committee told the reporter we were disqualified, but they never told us.”

According to a statement from the San Manuel Pow Wow, the couple wasn’t truthful about the gender of each dancer on the application form. 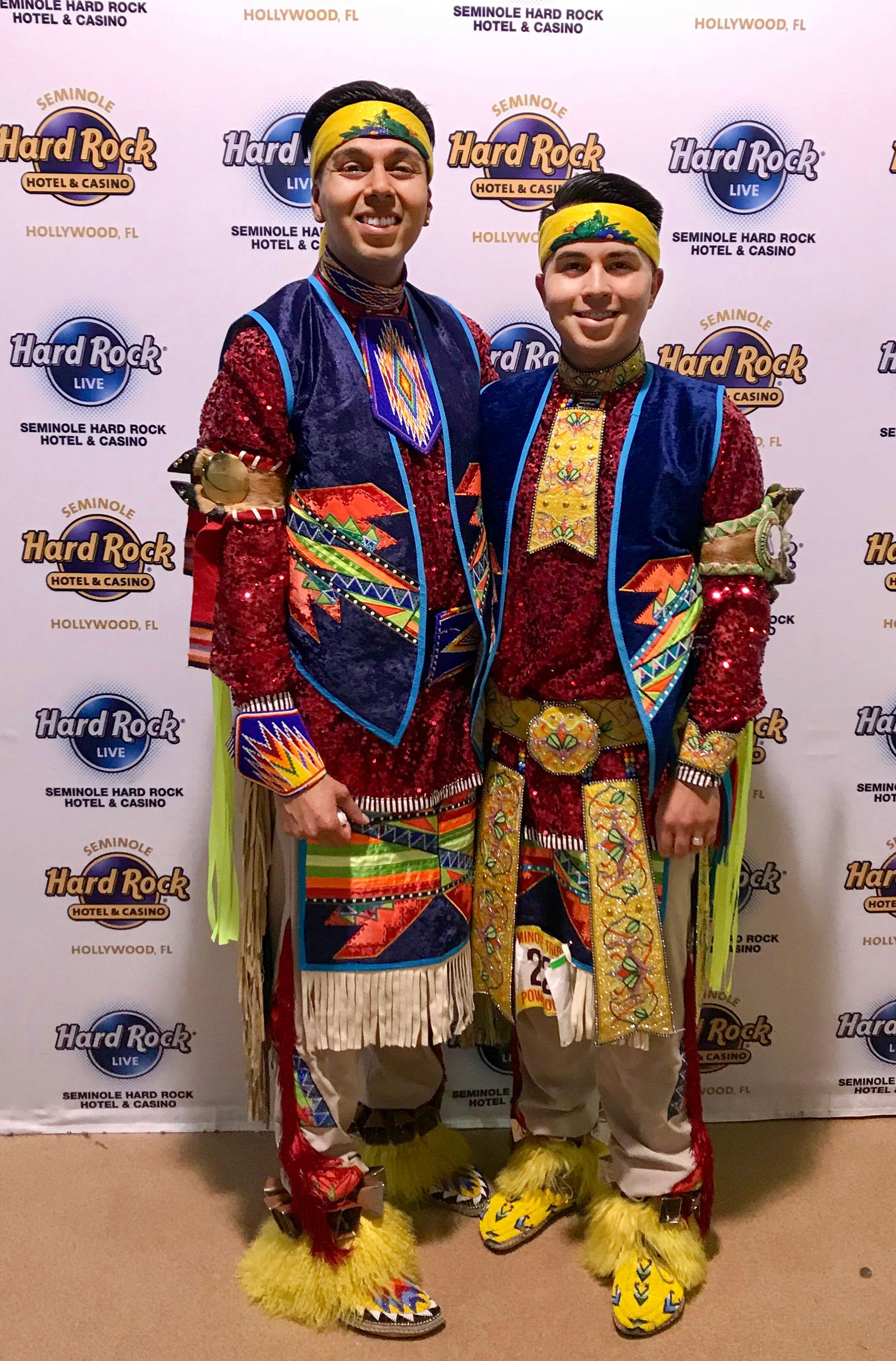 “The San Manuel Pow Wow competition rules state clearly that being less than truthful when entering any of our competitions will disqualify any participant. This couple misrepresented themselves as a man/woman couple to enter the contest, thereby were dismissed from competition when this misrepresentation was discovered. The same sex couple would have been ineligible to be in the competition under established rules. The Pow Wow Committee and judges became aware of the couple in question during the competition and agreed to allow them to complete the dance to honor them and their relationship,” the statement read.

Both Snyder and Stevens dance individually at pow wows and Stevens came in fourth at the Seminole Pow Wow in the grass dance category earlier this month. The Sweetheart’s Special was sponsored by Wanda Bowers, who welcomed everyone to dance.

“They had a really awesome routine,” Bowers said. “They stayed in and danced; I didn’t have any qualms about it. And then they took second. They had the nerve to get into my dance and when they placed, they had to say how they felt about the other person. They did it just like the rest of them. Fair is fair, I just asked for sweetheart dancers.”

Bowers realizes not everyone in the Tribe accepts Snyder and Stevens’ lifestyle. They have been together for five years and engaged for two. LGBTQ Native Americans are sometimes referred to as Two-Spirit people among tribes because the individuals have both a male and female spirit within them and are the embodiment of both genders.

Snyder and Stevens simply wanted to compete and were pleased when they realized they were welcome at Tribal Fair.

“The spouse of a staff member told us there were no rules here; just come here, show up and show out,” Stevens said.

Knowing they wouldn’t face any of the challenges or prejudices they had in California allowed them to focus on representing themselves as a couple. They were surprised and thrilled to win second place.

“I feel incredible, I feel accepted,” said Snyder. “Wanda just wanted people, couples. Those were the only rules. Compared to what we experienced before, it was night and day. The Seminoles have been beautiful. We felt so much love, positivity and hospitality here and felt good entering the arena.”

Tribal Fair was the fourth pow wow in which they competed together in a Sweetheart’s Special. The first was in 2015 at the Saginaw Chippewa Pow Wow in Michigan, then at a small pow wow in Washington state the following year, followed by the San Miguel Pow Wow in October.

After an article about them appeared in a People Magazine article  on Dec. 15, 2017, Snyder and Stevens were invited to speak at the Human Rights Campaign’s Time to Thrive conference in Orlando Feb. 17. The duo decided to stay in South Florida for the week and Bowers took them to the Ah-Tah-Thi-Ki Museum and Billie Swamp Safari in Big Cypress.

“We are excited to come here to experience the cultural centers, which is what we do everywhere we go,” Snyder said. “The culture of any tribe is what’s important and that’s what blows us away.”

Snyder is a beader and Stevens is a sewer who is known in the pow wow world for the regalia he creates, including the Ute inspired regalia they wore for the Sweetheart’s Special.

“We revamped our routine by running extra miles and really prepared ourselves for this,” Stevens said. “We challenged each other as dancers and used our athleticism to come back strong.”

The Sweetheart’s Special was comprised of four dances of different tempos over two days. The drums set the pace and the dancers did their best to keep up. Seventeen couples competed for the prize money and the top five were awarded prizes ranging from $250 to $2,000 plus a sweetheart box of candy for Valentine’s Day and a Seminole patchwork tote bag.

“We admire these couples,” Snyder said. “When you see that type of love and companionship, we are inspired by it.”