BRIGHTON — About 100 people on horseback, in all-terrain vehicles, swamp buggies, SUVs and one vintage military jeep drove 30 cattle over a 20-mile trek from the St. Thomas pasture north of Brighton to the Fred Smith Rodeo Arena from Jan. 27- 28 in the fifth annual Smith Family Cattle Drive and Ranch Rodeo.

In 2013, the Roger Smith Memorial Cattle Drive began the tradition of honoring the Smith family’s contributions to the Tribe with an annual cattle drive and ranch rodeo that, until this year, was always held on one day. Roger’s widow Diane Smith always intended to make the fifth one an overnighter.

“We’ve been talking about doing it in the fifth year from the start,” she said.

The Smith family legacy is a part of the fabric of Brighton. Patriarch Jack Smith Sr. was instrumental in the formation of Brighton’s cattle industry. His sons Fred, Richard, Jack Jr. and Roger all followed him into the cattle industry and served on Tribal Council and the Board of Directors. Daughters Mahala Madrigal, Nellie Smith, Oneva Baxley and Linda Tommie are still involved in the cattle business, as are other generations of the family.

“This is a family event and a chance to remember what they’ve done for the Tribe, the cattle business and the sport of rodeo,” said Chairman Marcellus W. Osceola Jr., the late Roger Smith’s son-in-law. “It’s the first year I’m not cooking and I’m happy to give someone else a turn.”

The family chose Brighton cattle foreman Bobby Yates to be trail boss. Yates, who has worked with the family since 2005, was honored to get on his horse and lead the way.

“The family has always been a good friend to me,” Yates said. “This is an honor and I have a lot of respect for them. When Roger passed, I helped them keep living his legacy.”

The St. Thomas pasture filled up with participants prior to the start of the drive. Riders saddled up and practiced their riding and roping skills before Yates and the crew brought the animals from a nearby pen. With that, horseback riders and a few hard-working dogs took their place behind and beside the herd and moved them out of the pasture onto the dirt road. A caravan of vehicles followed close behind.

“Roger was one of our independent cattle owners,” said Brighton Board Rep. Larry Howard. “The family is doing such a good job with cattle; it’s a blessing for the community.”

A few hours later, after a lunch break in a pasture along the way, the herd of cattle and people arrived at Camellia Osceola’s pasture which served as the stopping point for the night.  The cattle were moved into a pen and the crowd pitched tents in the pasture a few miles past the midway point of the drive. Two travel trailer campers rounded out the scene in the wide open pasture.  The campground bustled with activity as the sun set. A few folks competed in games of corn hole, rambunctious kids ran off their excess energy, adults sat in camp chairs and took in the scene, others inflated air mattresses and stowed them in nearby tents.

“The fellowship of sitting around the campfire, telling stories and reminiscing will be something we won’t forget,” Chairman Osceola said. “But we won’t eat from old tin cans like in the old days.”

A steak dinner and music around the campfire were among the highlights on a chilly night. As temperatures dropped into the 40s, folks inched closer and closer to the warmth of the fire. Singers Warren Silvers, Cody Williams and Sandy Olsen Buck strummed some country tunes on their guitars. The first was an appropriate choice for the crowd, “Mammas, Don’t Let Your Babies Grow Up to be Cowboys.” Songs by Merle Haggard, Willie Nelson, Johnny Cash, Waylon Jennings, Hank Williams and others followed.

The camaraderie around the campfire was apparent as people huddled together to enjoy the music. Songs about Texas, shotgun rifles and a 4-wheel drive were followed by a soulful rendition of Seminole Wind.

The next day, the group broke camp and headed out to move the cattle to the rodeo arena, where they enjoyed a hearty lunch.

Eleven teams from around the area competed in the ranch rodeo at the Fred Smith Rodeo Arena Saturday evening and Sunday. The rodeo featured events and skills that are useful in cattle ranching, including ranch bronc riding, team sorting, team roping and branding, team tying and a relay race.

The team from J-Cross Roping in Big Cypress, which included Naha, Josh, Blevyns and Ahnie Jumper and Keith Crumb, won the rodeo.

“The Indian guys and girl beat all the other teams,” Diane Smith said proudly. 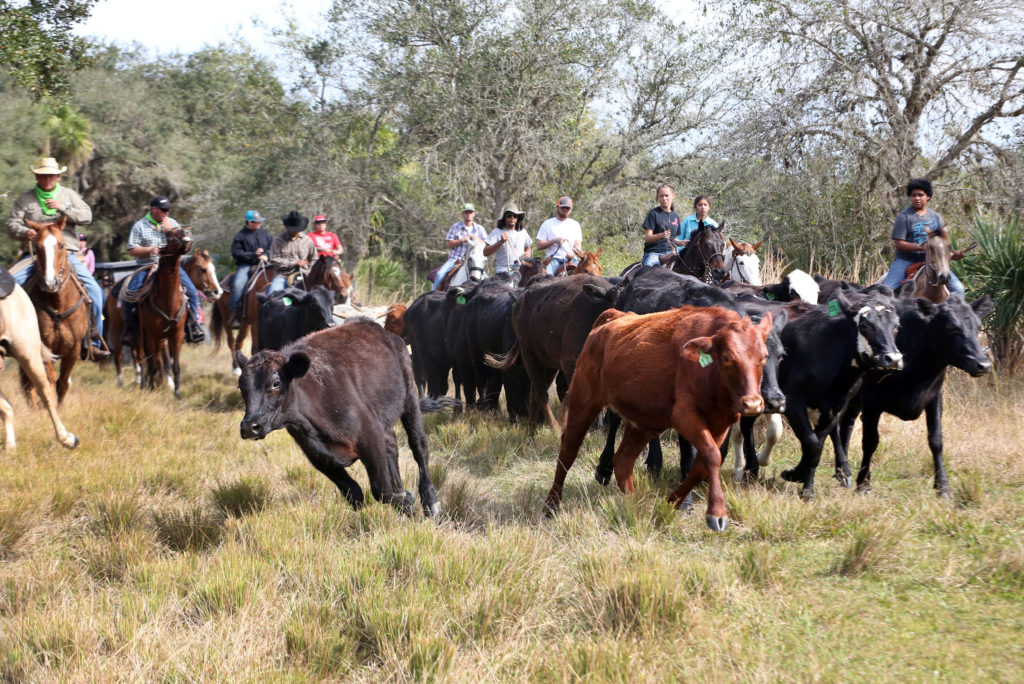 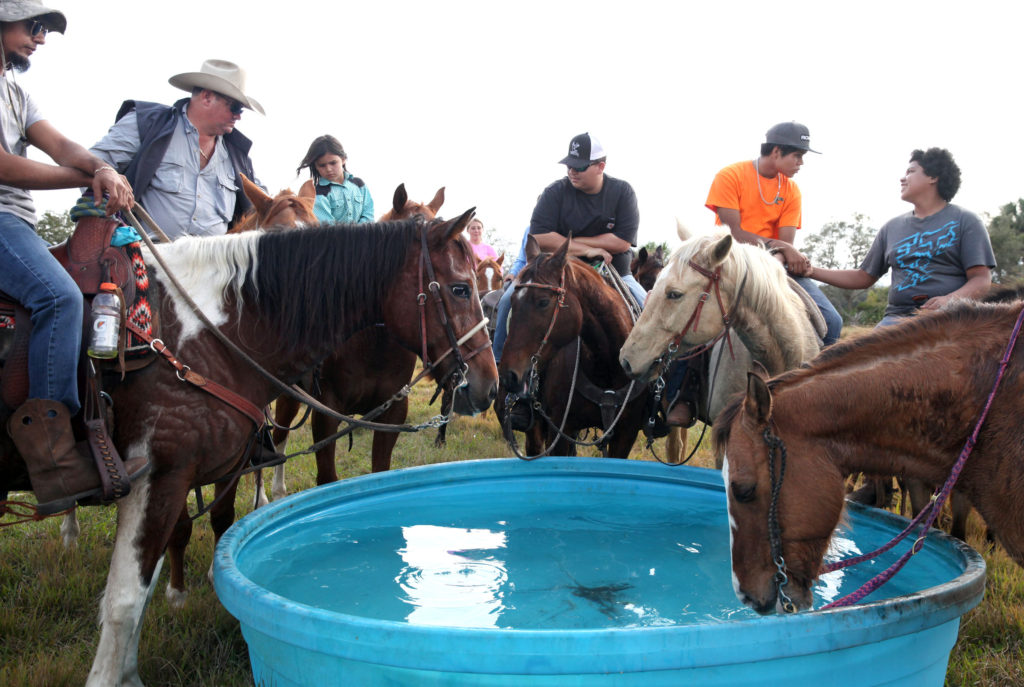