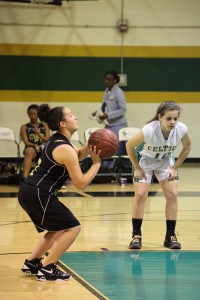 Although Breanna Billie was a late season addition for the Moore Haven girls’ team, head coach Vincent Lewis was happy with her performance.

“Breanna was a big asset to us toward the end of the season,” Lewis said. “She spent a lot of the year on our middle school team but got to move up as the season went along. We did win two of our games because of her contributions.”

The two wins were a 35-24 home victory over the Ahfachkee Warriors on Dec. 12 and a 33-30 home win over Cape Coral’s Oasis Sharks on Jan. 13. Billie, a freshman point guard for the Lady Terriers, scored eight points in the win over Ahfachkee and scored six in the win over Oasis.

“Breanna stepped up in those games,” Lewis said. “That was really good for her because we only averaged about 20 points in all our games this season. Breanna’s biggest asset is that she can shoot the ball really well and hit her free throws. We look forward to her playing a bigger role for us next season.”

In Billie’s final two games of the season – a 48-14 home loss to Sarasota Christian on Jan. 27 and that playoff quarterfinal loss to St. John Neumann – she showed growth on the court, particularly in ball-handling and moving without the ball.

Billie showed flashes of potential in the playoff game against St. John Neumann, as she guarded Neumann junior point guard and Naples Tribal citizen Bryce Osceola for much of that contest.

Billie had a rebound and a steal in the Jan. 31 season finale, while Osceola recorded a rebound, a steal and two assists in her team’s home playoff win over Moore Haven.

The Lady Terriers ended the season with a 2-17 overall final record, including a 1-1 record against Ahfachkee.

“We’re a young team, and we’re going to get better next season,” Lewis said. “I expect Breanna to go hard next year. It doesn’t matter how much she scores. All that matters is her presence being on that court. With Breanna on our team, it’s a plus for us.”

“It’s fun to play Tribal members from other reservations,” O.B. Osceola Sr. said. “To see Breanna playing against my granddaughter was really nice to see. Both Bryce and Breanna represented our Tribe well out there on the court.”

Billie, who averaged 2 points per game this season, said she enjoys playing for Moore Haven.

“It was fun,” Billie said. “I plan on playing for Moore Haven again next season.” 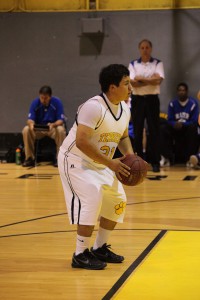 Marshall Tommie’s Moore Haven boys’ team finished its season with a 4-16 record, including two wins each over Oasis and Ahfachkee.

In Tommie’s final game of the season, a 63-51 home loss to Sarasota Christian on Jan. 27, he went 4-for-6 on the free-throw line, gaining 4 points to help his team stay competitive with the Blazers on Senior Night.

“Marshall started with us late, but he’s a pretty good shooter, especially on the free-throw line,” head coach Wayne Reese said of the sophomore guard. “His knowledge of the game is probably one of the best we have on our team. He’s a good athlete and a great guy. I really appreciated his time on the court for us.”

Tommie, who averaged 4 points per game this season, played an important role in at least one of Moore Haven’s four wins this season, including a 51-44 road win against Ahfachkee in Big Cypress on Jan. 19.

“I’ve been worried more about the team than myself,” Tommie said. “With the position I play, I was just trying to get my team involved. It’s not all about me.”

Tommie, who said he had a choice to play for either the Okeechobee Brahmans or the Moore Haven Terriers varsity basketball team, said he will stick with Moore Haven next season.

“I like the fact that everybody plays as a team and has a chance to contribute on the court,” Tommie said. “I got to improve on my dribbling and driving skills. I’m becoming more like a point guard now. It’s a fun position to be in here.”

Tommie’s mother, Martha Tommie, said she was impressed with how he handled himself throughout the season.

“I think Marshall’s pretty good,” she said. “He has a future in basketball. I would like to see him do well at Moore Haven.”