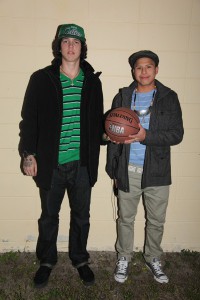 BRIGHTON — Brighton Tribal youths Phillip Jones and Trewston Pierce have had an exciting start to the basketball season.

The two Brighton athletes play high school varsity ball for the Okeechobee Brahmans boys’ team, and they have shown off their skills on the court in a big way. Just recall Okeechobee’s 80-58 blowout win over the Moore Haven Terriers on Jan. 4.

In the game – played at Moore Haven High School – Pierce led the Brahmans with 16 points, including a one-handed dunk in the third quarter that sent fans from both Okeechobee and Moore Haven into a frenzy.

“Trewston’s dunk in the Moore Haven game really got our team going,” Jones said. “From that point, we never looked back.”

Meanwhile, Jones added 13 points in the victory, which moved Okeechobee to 6-5 for the season as of Jan. 4.

“From the first day of the season, Phillip has been our leader,” Okeechobee Brahmans head coach Shawn Hays said of his junior point guard. “He’s been the guy that takes care of our offense. He gets us in our sets when we have the ball.”

Jones’ skills, however, are not limited to the offensive side of the ball.

“He’s the toughest and quickest guy we have on defense,” Hays said of Jones, who typically guards an opponent’s best player on the floor. “He gets the toughest assignments and handles that very well.”

During the course of 11 games, Jones has averaged close to 10 points per game, five assists per game, two rebounds per game and two steals per game – a well-rounded stat line for a point guard.

“It’s good to be representing my Tribe for Okeechobee,” Jones said. “It means a lot to me. When I’m playing on the court, I’m always thinking about my people. It’s important for me to make the Tribe look good in whatever I do. That’s what I’m all about.”

Jones, who was born in Hollywood, has played basketball ever since moving to Brighton at the age of 5.

“On every reservation, all we usually do is play basketball in the gym,” Jones said. “It’s where I learned my craft in the game. I met a lot of my friends on the basketball court.”

That includes Pierce, who, as a freshman for the Okeechobee Brahmans, has grown into a key player on the varsity boys’ team.

“Trewston’s a little bit younger than me, but we’ve always hung out together,” Jones said. “He’s getting better every day as a player.”

Pierce, who has averaged 16 points, 10 rebounds and three blocks per game, said he loves playing with Jones for Okeechobee.

“It feels good to be playing with him,” Pierce said. “We grew up together since we were little. Not too many are still around.”

Hays spoke highly of Pierce as a ball player.

“Trewston, for being a freshman, is far more mature than most kids in his grade,” Hays said of Pierce, who would like to play college basketball for Duke University. “He’s very athletic and he has a dominating presence on the court. A lot of nights, he is our best player on the court.”

Pierce, who was recently named MaxPreps.com’s Player of the Week, said he wants to become the best player in his district by the time he’s a senior.

Jones, meanwhile, hopes his efforts on the court can eventually land him an opportunity to play college basketball for Florida State University.

Both Pierce and Jones said they are happy with their development as basketball players.

“It’s good to see both of them playing together,” said Claudia Gore, Pierce’s mother. “I was really excited for Trewston and Phillip in the Moore Haven game. If they continue to leave it all out on the court, then they’ll have a chance at playing college basketball. I would love to see that happen for them.”