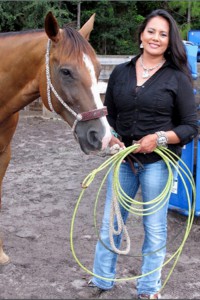 LAKE CITY — It can be very rough and tumble in the world of Rodeo Team Roping, but Tribal athlete and mother Tara Courson and her family have embraced its challenges.

Although a late bloomer to the sport, the 36-year-old of the Panther Clan has made up for lost time while claiming her first championship last July as the Eastern Regional Finals Cruel Girl Jeans champion.

She followed up the win in late October with a feature story in the national insider magazine Super Looper, the official publication of the United States Team Roping Championships. All in just four years of competing.

“It’s something I have always wanted to do,” Courson said.

Husband and semi-professional roper Jerry Wayne Courson introduced Tara and son Blaine, 17, to the team event known as the only event of its type in rodeo.

“I’ve always been there for her and the kids (Blaine and Jara Ann, 14) and I’ve always said if they want to learn, I’m there for them,” Jerry Wayne Courson said. “I stay on her to continue to work her way up in the system. If a person has any competitive bones in their bodies then they want to be good.”

As a former four-sport high school star athlete, she has plenty of competitive experiences to draw from but admits to needing to improve on her mental approach and handicap in the sport. She currently ranks No. 4 on the 1-10 scale in measuring skill and performance.

“The ability to perform under pressure has been the toughest part for me,” she said. “Getting over the intimidation of being a novice rider has also been tough.”

Younger brother and Tribal Deputy Treasurer Pete Osceola-Hahn is not surprised at her early success. He said her work ethic helped motivate him to succeed as he developed into a high school letterman in football, baseball and wrestling.

“Traveling and watching her from tournament to tournament made it an easy transition into sports for me,” Osceola-Hahn said. “I liked her focus and drive and she was dedicated to whatever she was involved in; she also had skills you just couldn’t teach — all of those extra little things.”

Tara said her husband, horse of two years Kaw-liga and other veteran riders and role models, such as fellow roper Beverly Robbins, continue to help motivate her to improve.

“How successful you are is also a part of the teaching you have,” she said, crediting Jerry Wayne, currently a No. 8 handicap. “Kaw-liga has also helped take my roping to the next level.”

Courson said her husband’s support has meant the world to her, and his persistence in competing in spite of recent health issues has drawn the family even closer. After Courson’s husband was diagnosed with end-stage renal disease and dialysis in 2008, Courson gave him a kidney in late 2009.

“While he was sick I thought, ‘If he loves this sport so much and it is what keeps him going, it’s something we all should do as a family,’” she said. “I thought, ‘If it can continue to motivate him, what a great sport it is.’”

She and their teens have not looked back, and both children show promising potential.

Blaine, although an aspiring baseball athlete, is doing well. He recently won the South Georgia Team Roping Championships in Perry, Ga., and he finished 21st in the country in the National High School Rodeo Finals as a heeler for the 2010-11 season. Jara Ann continues to learn the ropes while competing as a freshman on the rodeo/roping team

With more than $20,000 in career earnings to date, Courson will look to build on that and claim her second title in the National Team Ropers League Championships in Jacksonville, Fla. from Jan. 26-29 with $5,000 at stake in cash and saddle prizes. She will compete in the No. 13 to No. 8 categories.