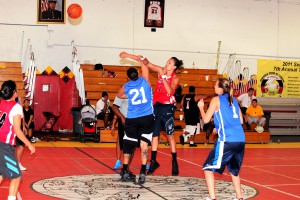 The first-ever Big Cypress New Year’s Basketball Tournament was held from Jan. 6-7 at the Herman L. Osceola Gymnasium, and it ended with a bang.

Big Cypress, Brighton, Hollywood, Immokalee and Trail all had teams represented at the tournament.

“I’m glad to be here,” said Geraldine Osceola, an Immokalee Tribal citizen who played for the Young Legends women’s team. “We have a lot of family and friends from all the other reservations, so when we get together like this, it makes for a very enjoyable event. It’s a good get-together for all of us.

Big Cypress Recreation Coordinator Kelvin Robinson, the mastermind behind the event, said he created the tournament to kick off the New Year.

“We want to have this tournament every year around this time from now on,” he said. “There are a lot of good players and a lot of good teams that came out to play. It’s a fresh start and it’s only going to (get) better from here.”

The men’s final between “G” and Nothing Fancy went down to the last seconds of the second half of play as Nothing Fancy’s Amos Huggins hit a mid-range fadeaway jumper over “G’s” Drexley Tango with 1.2 seconds left for a 45-44 lead.

After a timeout by “G,” the plan was to try for a game-winner on a catch-and-shoot play.

Unfortunately for “G,” time ran out on the tournament favorite as Nothing Fancy (5-1 final record) held on to take home the inaugural men’s title.

“There was no time left,” Amos Huggins said of his tournament-winning shot. “I just happened to be in position to hit the fadeaway and I’m happy it went in.”

However, early on in the men’s final, it looked as if “G” (3-1 final record) was going to run away with this one.

Nothing Fancy found themselves down seven points twice in the first half (16-9 with 11:14 left in the first frame; and 18-11 with 7:50 left), but their patience on defense and their knack for taking care of the ball paid off in a big way as the Trail-based team clawed its way back with a 12-4 scoring run to take a 23-22 halftime lead.

“It wasn’t easy,” Huggins said. “We knew we had to grind it out if we were going to have a chance to win the championship.”

Nothing Fancy extended their lead to 26-22 with 13:49 left in the second half, thanks to a 3-pointer made by Jerome Huggins, who scored 13 points in the final.

A 5-0 scoring run by “G” gave the lead back to the tournament favorite, 27-26, as the momentum shifted at 12:35 left in the second half, highlighted by a towering floater from “G’s” Dovante McCallam.

But the play of the entire tournament came on Nothing Fancy’s next offensive series as Charlie Osceola – a 13-year-old who stands at 4 feet, 10 inches – dribbled his way toward the baseline to convert on a reverse layup shot over “G’s” McCallam, who stands at 6 feet, 7 inches.

“I didn’t want to foul him (Charlie Osceola), so I just let him hit it,” McCallam said.

The play, highlighted by Charlie Osceola’s speed and nifty footwork, mitigated a strong scoring stretch by “G”, who used an 8-4 run to tie the game up at 30-30 with 10:00 left in the second half.

Charlie Osceola, who finished with 11 points in the final, added another highlight for himself as he connected on an open 3-pointer – one of his three treys in the final – to put his Nothing Fancy team back on top, 33-30, with 9:46 left.

An 11-4 scoring burst by “G” later turned into a 41-37 lead for the tournament favorite with 6:08 left, thanks in large part to three timely layups from McCallam, who led all scorers with 18 points in the title game.

Not to be deterred, Nothing Fancy showed its hustle and discipline on the defensive end, as the Trail-based team clogged up the passing lanes and clamped up “G’s” playmakers for the rest of the second half, forcing “G” into multiple missed shots and turnovers.

With 3:08 left in the game, after Nothing Fancy beat “G” to the boards for a key rebound, Amos Huggins zoomed way past “G’s” Doug Sanders (eight points overall in the final) to allow Nothing Fancy to tie the game up at 41-41.

A costly travel committed by “G’s” Troy Little (four points in the final) gave the ball back to Nothing Fancy with 1:17 left. Just five seconds later, Amos Huggins beat all the “G” defenders to the bucket for a driving lay-in, giving Nothing Fancy a 43-41 lead.

Nothing Fancy lost to Brighton in the preliminary round before going on a four-game winning streak in the loser’s bracket en route to the final. Nothing Fancy’s improbable run to the title seemed to fall just short after “G’s” Sanders hit a 3-pointer from the top of the key to give the favorites a 44-43 lead with just 8.8 seconds left.

But the fadeaway shot from Amos Huggins ended up as the play that decided the championship for both teams, as Nothing Fancy celebrated on the court after the buzzer.

“We focused on defense toward the end of the game,” Amos Huggins said. “We wanted to limit the three-pointers and the layups and once we found a way to do that, I felt that we would take the title home.”

Meanwhile, “G” cruised through its first three games, with easy wins over Fearless (Immokalee), Big Cypress Men and Fly G’z en route to the final. “G” was the only team to avoid the loser’s bracket.

It makes Nothing Fancy’s title run that much more special.

The women’s final, meanwhile, pitted Lady Ballers against You Don’t Want It – the two best ladies teams on the court.

Lady Ballers limited You Don’t Want It to 2 points in the second half.

“It felt great to pull it off,” Van Stippen said. “We just knew we had to stick together and hustle hard. defense was the key.”

You Don’t Want It’s Courtney Osceola, who scored two points in the women’s final, said she thought her team was going to win it all.

“We weren’t crashing the boards enough,” Courtney Osceola said. “They (Lady Ballers) were getting wide open layups in the second half and we didn’t get the stops. That’s how we lost the game.”

Lady Ballers, who defeated Young Legends (0-2 final record; fourth place overall) and You Don’t Want It (2-2 final record; tournament runners-up) in the preliminary rounds, was down by as much as six points in the first half, when You Don’t Want It’s Pearl Kelewood (13 points total – all in the first half) sank one of her two 3-pointers to give YDWI an 8-2 lead with 9:57 left.

Robinson offered his take on how both the women’s and men’s final – plus all the games prior to that – turned out.

“It was very exciting down to the last second – literally,” Robinson said. “It was a really good one. We’re definitely going to have another one this time next year. Let’s make it happen for them.”