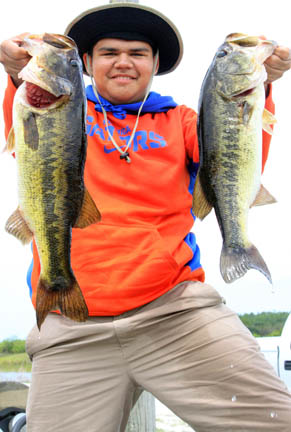 BIG CYPRESS — Seeing the day’s biggest bass in young hands made Mike Tiger smile because he knew it would have made his dad happy.

“Getting kids involved, getting families involved, that’s what my dad was about,” Tiger said at the Howard Tiger Memorial Fishing Tournament May 31 on Big Cypress Reservation.

The heaviest bass was reeled from canal waters by the tournament’s youngest fisherman, Trevon Marks, 14. Another teen, Blevyns Jumper, 17, teamed up with his father, Josh, to capture the overall championship in the three-tournament Triple Crown series.

“We’ve accomplished what we wanted to do with the tournament in getting youth involved. My dad was a big advocate of youth,” Tiger said.

At home and overseas, the late Howard Tiger was a leader and pioneer on many fronts. He was the first Seminole to join the U.S. Marine Corps in World War II and was part of the first wave to land in the Battle of Iwo Jima. Afterward, he devoted much of his life to the Tribe and its youth while raising three sons and a daughter with his wife, Winifred.

“He was the first person in the Tribe to start a recreation program for the youth,” Mike Tiger said. “He loved the Tribe; he loved the youth. He was a great coach. He was an outstanding baseball player and football player in his day, and he was an above-average boxer. He boxed in Golden Gloves.”

Howard Tiger, whose legacy will continue to impact generations of Tribal youth when the new Howard Tiger Recreation Center opens in Hollywood, also loved outdoor activities in and out of the water.

“He was an outdoorsman, hunter, fisherman,” Mike Tiger said. “I remember he’d swim the canals to go and shoot deer. He’d come back across the canal with a deer, swimming ahead of the deer.”

Sporting a hunter’s look with a bright orange University of Florida sweatshirt, Marks proudly returned with the tournament’s biggest catch, which earned him the Sonny Di Carlo and Clyde Tiger Big Bass Memorial award. Weighed by Joe Collins from the Hollywood Recreation Department, the bass tipped the scale at 8 pounds, 2 ounces.

“That’s a big bass. Over the years, we’ve had guys who brought in some nines, not a 10 yet,” said retired tribalwide Recreation director Moses Jumper Jr., who helped start the tournament about 30 years ago.

For the past few years, the tournament was dormant. It returned this year to join two earlier tournaments as part of the Triple Crown. The tournament didn’t reach double digits in the number of boats, but now that it’s back, there was a boatload of optimism about the future.

“We usually have upwards of 10 to 20 boats. It was always a big thing for us,” Jumper said. “Hopefully this year will generate interest again.”

Marks partnered with Kassim Stockton to bring in four bass and a tournament-high 22.65 pounds, most of which came aboard after a lengthy drought.

“We had a dry spell for about two-and-a-half hours. We weren’t catching anything,” said Marks, a student at American Heritage School in Plantation. He cast his first line at age 3.

“They weren’t cooperating with me today at all,” said Jackson, who caught one bass.

“We had some dry spells, but (overall) it was good. Twenty pounds isn’t bad,” Josh Jumper said.

Neither was their winning Triple Crown total of 53.69 pounds, nine ahead of runners-up Marks and Stockton.

“I easily could have done that with two fish,” Marks quipped about the difference.

An awards ceremony was held after all the bass were weighed and released back into the canal. Moses Jumper Jr. thanked Hollywood Councilman Chris Osceola for sponsoring the tournament.

“If it wasn’t for Chris Osceola, we wouldn’t have this one,” Jumper said.