Skip to content
You are here
Home > Sports > A ray of hope: Slumping Tampa Bay turns to Seminole medicine man 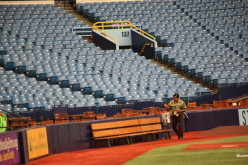 ST. PETERSBURG — As manager of the team with the worst record in Major League Baseball in early June, Tampa Bay’s Joe Maddon decided to “turn Bobby Henry loose on Tropicana Field” in an attempt to end the Rays’ slump.

So, with a carte blanche pass to go anywhere he wanted in the team’s 1.1-million-square-foot domed stadium, including the clubhouse and the players’ parking lot, the Seminole medicine man arrived early June 9 before the Rays’ afternoon tilt against the Seattle Mariners and went to work. He carried a cloth satchel, which included tu-lee (red bay leaves), and “special water” in a glass bottle through security (glass isn’t allowed on the premises).

“It’s OK,” said Rick Vaughn, the Rays vice president of communications. “These guys are special guests of Joe.” In fact, it would be that way for the next few hours as Henry followed his instincts through public and private areas of the complex.

Henry, a Tampa native and Otter Clan patriarch, has a reputation as the area’s resident medicine man. In 1985, his services were requested by the city of Tampa to bring rain to a severely parched area, and his ritualistic treatment with tortoise and frog brought immediate thunder and rain. He may have stopped the rain at the 1990 Miami Grand Prix and the 1994 Discover Native America Powwow in Jacksonville. He also worked with the Culverhouse family to bring winning ways – even a Super Bowl victory – to the once hapless Tampa Bay Buccaneers.

“I live here. Tampa is my home,” said Henry, who moved his family to Tampa to occupy the new Seminole Reservation in 1979. “I want to help out [the] Tampa area however I can. I like the Rays and ol’ Joe. I watch them on the TV all the time. They are my team. I’ll help them out if I can.”

The idea to use a medicine man to try to end the Rays’ woes came from licensed massage therapist Sue Ontiveros, whose friend, Skip Milos, is a Rays team photographer. Ontiveros’ idea eventually made it to Maddon, who “became very excited,” Vaughn said. “Joe is probably the only manager in any sport who would even consider such a move, much less make it happen.”

In a private talk in Maddon’s office, the Rays skipper explained his mindset: “A lot of the things that have been happening to us are happening to a good team. People may call us the worst team in baseball because we have the worst record. I tell the players we earned the right to be called that. But, truth is, we are definitely nowhere near the worst team. We’ve had some things happening that can’t be explained. Players who always make a certain play and then they don’t … We hit the ball hard and it is right at someone. They hit it hard and it is two inches away from our gloves.”

Maddon was asked if it was a curse.

“Yeah, whatever you want to call it, I’m hoping Bobby can stop whatever’s going on, take it out of here,” Maddon said.

“Oh, we’ll do it,” said Henry, who was surprised by a personal gift from Maddon – his own Tampa Bay Rays official team jersey with BOBBY 1 on the back. “We’ll do it. But you got to give it some time. I may have to come back and do something else in a week.”

“Let him have it, go anywhere he wants to go,” Maddon instructed Vaughan.

Maddon later described Henry to reporters as a “uniquely engaging fellow. I really enjoyed my moment with him. We just turned him loose on the Trop.”

Henry marked territory as he walked around the artificial grass field and along the entire outfield wall. He meditated in the Rays dugout on the first base side and then ate breakfast with the Rays, many of whom gratefully shook the medicine man’s hand. Shortstop Yunel Escobar brought two of his bats to Henry, who rubbed them with his hands.

“I feel energy,” Escobar said. “I feel energy with this man.” (Later Escobar, using one of the bats, delivered a base hit on the first pitch he saw).

Outfielder Brandon Guyer, who was on the disabled list at the time of Henry’s visit, had his injured thumb caressed by the medicine man. Still red and blue, Guyer said the cast had just come off that day. He wondered when the thumb would be back to full strength.

Bench coach Dave Martinez brought Henry into his office to fill out that afternoon’s lineup card. Henry rubbed his hands all over the card.

During the game, Henry sat behind the backstop. Just as the Rays came to bat in the bottom of the first, loud thunder could be heard outside the high dome ceiling. An unexpected thunderstorm swelled up and sat directly atop the stadium.

All of the game’s runs came from Seattle in the third inning as the Mariners scored three times off Rays starter David Price, who pitched a five-hitter with 10 strikeouts and one walk. The Rays squandered numerous scoring chances, leaving 10 men on base; however, curse-type plays that Maddon had alluded to never appeared. It was a loss – the 13th in 14 games – but a normal loss.

“Something’s working,” said Henry, who was interviewed throughout the game by media. His image was beamed around the world as a lead item in ESPN, FOX and other sportscasts. “Just got to give it some time.”

Although he was asked often, Henry would not specifically explain his medicine work in the ball park.

“I don’t like to talk about it. Talking about it is no good. You just have to accept the way of the Seminole. It’s like when you go to a doctor. He gives you something to take and if it don’t work, you go back and he tries something else,” he said.

During a postgame press conference, a frustrated Price said, “Yeah, we had a medicine man here today sprinkling water on peoples’ chairs. That didn’t work.”

Maddon, however, took a different view. He made it clear he was in it for the long run, fully expecting his last-place team would recover and be strong in the second half of the season.

“Yes. It rained heavily. We did ask Bobby for more hits. Maybe he thought I said more rain. Nevertheless, just be patient with all this. Just give it a little time …,” he said. “But it was an intense rain. From what I understand, it was right over the Trop which I’m pretty impressed with. That’s pretty solid. Maybe it was a cleansing rain. Let’s consider it a cleansing rain. Let’s see what happens over the next couple of days.”

Since Henry’s visit to Tropicana Field, the Rays have won seven games and lost five.