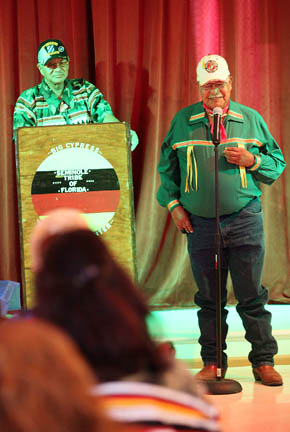 Gerald Wellington, the event’s guest speaker, had yet to put his feet on Vietnam soil when he saw the sky light up as his airplane descended.

“The airport had just got hit with a rocket attack, so we just circled around. They scrambled F-4s to go after the people who sent those rockets,” said Wellington, 68, from Chattanooga, Tennessee.

Wellington’s “welcome to Vietnam” moment occurred at the start of his three tours of duty in country with the U.S. Navy. He worked in construction battalions and security.

“I just praised the Lord that I didn’t get hurt over there. I know my church was praying for me. At that time, I didn’t know Christ. I accepted the Lord after I got back,” said Wellington, who now assists Native American ministries with his wife.

“I’m so glad I made it back,” said Paul Bowers Sr., a U.S. Marine Corps veteran and Purple Heart recipient who served in Vietnam.

David Whidden, another Marine veteran, said he served in the late 1960s close to where Bowers was located in Vietnam. Whidden told the audience that he joined the Marines “to find out if I was man enough to do the things you have to do in a war.”

Whidden said he “talked to God a lot” while in Vietnam.

“With the good graces of God, I came home and started a family,” he said.

Serving in the military for Mike Onco was just like being in a family.

“We all looked out for each other,” he said.

Drafted in 1969 by the U.S. Army, Onco said he wanted to go to Germany but was sent to Vietnam.

“The first thing I remember when I got off the plane was the smell,” he said.

Joe Osceola Jr. had never been on an airplane until he was drafted. He volunteered for jump school and served in Vietnam with the Army.

Younger veterans, such as Salli Josh, also participated in the Veterans Day event. Josh joined the U.S. Navy in the mid-1990s and served until 2008.

Josh’s family spans generations of military service. Her father, Coleman Josh, served in the Army, which is where her son, also named Coleman Josh, recently enlisted.

Other speakers included Army veterans Don Mitchell, who is part of four generations of military service in his family; Mitchell Cypress, who hosted the program; Joseph Morgan; and Kenneth Ward.

Before lunch was served, Paul Bowers Sr. read the roll call of names of living and deceased Seminole veterans.