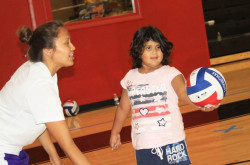 BIG CYPRESS — No matter the ages of their players, coaches often mention that doing little things correctly leads to success. In volleyball, that sentiment even applies to youngsters barely taller than the bottom of the net.

So when Janah Cypress, 6, learned how to set her hands and arms to make a pass, and Ramon Vasquez, 8, started hitting the ball over the net instead of into it, smiles lit up the faces of their instructors during the Haskell Indians Nation University Volleyball Camp June 16 at the Herman L. Osceola Gymnasium on Big Cypress Reservation.

“It starts at these young ages,” said Haskell volleyball coach Nana Allison-Brewer. Allison-Brewer brought two of her players to Big Cypress and Brighton for four days of camp at the start of summer programs offered by the Recreation Department.

“It’s neat that we have such a big group of younger ages. Hopefully, we can sustain it and help build that passion and love within the Indian community,” she said.

“I learned how to serve and how to spike,” Javian Cypress said. “I like serving better because you start the game off.”

Javian was impressed by the visitors from Haskell, a college in Lawrence, Kan. for federally recognized Tribes.

“They’re good. They hit the ball hard,” he said.

The favorite sport for Javian – similar to many youngsters on reservations – is basketball, not volleyball. Where does volleyball rank among sports in Indian Country?

“It’s not very high,” said Allison-Brewer, which is why the former University of New Mexico player is trying to increase the sport’s popularity on reservations through her camps and the Native American Volleyball Academy that she founded seven years ago.

“It’s to promote and help volleyball within the Indian communities. This is all tied in to be able to come here and hopefully help develop this population within the sport,” she said.

When Haskell came to Florida last fall to play two matches in Lakeland, Allison-Brewer and her players held a camp for youth on Brighton, which has a successful travel club program that won multiple tournaments this past winter.

“I just want to help that energy that has started to build here,” she said.

For Atcitty and Runs Through, both of whom did not start playing volleyball until about the fifth grade, working with youngsters is a rewarding way to spend the offseason.

“I enjoy the little kids,” said Atcitty, a Navajo from New Mexico.

After the Big Cypress event, Runs Through, an Assiniboine Tribe member, said she was impressed that the Seminole kids took quickly to the sport.

“I wasn’t able to do some of the skills they’re able to do at that age. I think that’s awesome,” Runs Through said.