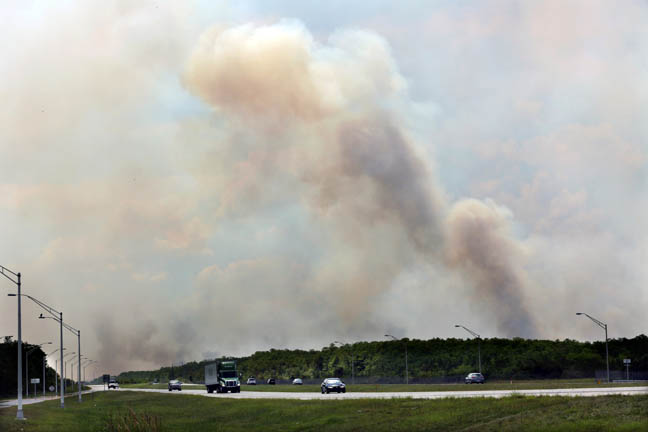 About 349 personnel from eight firefighting units cooperated to extinguish the fire, which had grown by May 26 to more than 35,000 acres located approximately 3 miles southwest of the Big Cypress Reservation.

“South Florida is a fire ecosystem,” said Don Mitchell, Seminole Tribe Battalion Commander and Assistant Fire Management Officer. “Florida gets more lightning strikes than any other state in the nation. It’s not ‘if,’ but ‘when’ and how bad it’s going to be.”

The preserve fire consisted of two main fires: the Square fire north of Interstate 75 and the Ellison fire south of the highway. Additional smaller fires were also discovered. Smoke permeated the area between mile markers 60 and 73, about 10 miles east of State Road 29.

Additionally, two single engine AT-802 air tankers each loaded with 800 gallons of water flew out of Big Cypress Aviation to fight the preserve fires. The planes, owned by Fletcher Flying Service of Immokalee, are crop dusters built specifically for firefighting. The planes dropped water over the fire from an altitude of 100 to 200 feet.

The Tribe’s Forestry and Wildland Fire Department has earned a national reputation in recent years and has subsequently been recruited by other Tribes throughout Indian Country and the Bureau of Indian Affairs (BIA) to fight wildfires in northern and southern California, Arizona, Oregon, Wyoming and Michigan.

“It was totally different out there,” said Martin, who fought fires in northern California’s Klamath National Forest last summer. “It’s so dry there; we can get away with burning more things here than they can.”

May through July is wildfire season in Florida, but controlled, or prescribed, fires are used to reduce hazardous buildups of fuel and create firebreaks that protect people, homes and wildlife habitat, said Mel Johnson, National Park Service (NPS) park ranger. The Florida Forest Service burns more than 2 million acres statewide annually in prescribed fires, according to their website; the Tribe’s Forestry and Wildland Department burns 15,000 to 18,000 acres each year on the Big Cypress and Brighton Reservations, said Jeff Alter, the department’s division chief.

Johnson said that even though this fire was not a prescribed fire, they will let it burn as long as it does not endanger homes or highways.

He believes the fire will burn until the arrival of the rainy season in June.

“When we get new lightning starts or old fires are brought back to life by wind, we send firefighters in to put them out,” Johnson said. “We are using aggressive tactics and attacking fires as they start now.”

He said decades ago, firefighters would have done everything possible to put out fires, but they now realize the benefits of them.

For example, sawgrass prairie fires release nutrients into the ground, Johnson said. Deer thrive on the fast-growing, fresh shoots, which sprout quickly after a burn. As a result, the Florida panther thrives on the abundance of deer. Other benefits of prescribed fires include disease control in young pines and habitat improvement. According to the National Park Service, panthers make dens in areas burned by fire less than four years before. Turkeys also like the burned, clear environments; 62 percent of their nests are found in areas burned less than two years prior.

Fires also burn vines growing on tree trunks, preventing snakes from climbing them to feed on eggs of the endangered red-cockaded woodpecker.

Mitchell said the Florida ecosystem thrives on fire. Some plants need fire to provide sustenance to wildlife and domestic animals. Smutgrass, which grows wild in Big Cypress, Brighton and throughout the state, needs to be burned when it grows taller than 8 inches or cattle will not eat it. The Forestry and Wildland Fire Department regularly burns pastures to facilitate fresh growth. Only four days after a portion of the preserve fire was extinguished, fresh growth was visible.

“Cattle love it,” Steelman said. “It has high protein and nutrients. The new shoots are easier to digest and give them more energy.”

Native Americans have used prescribed fire for hundreds of years, said U.S. Department of Agriculture’s Forest Service historical analyst Gerald W. Williams. In a 2001 report, he wrote that “American Indians burned parts of the ecosystems in which they lived to promote a diversity of habitats, especially increasing the ‘edge effect,’ which gave the Indians greater security and stability to their lives.”

To protect Tribe land from the spread of the Square fire, Mitchell’s men used bulldozers to clear the tribal boundary shared with the preserve. The heavy equipment allowed them to create a fire line by clearing the brush down to the soil, ridding the area of fuel for the fire.

The peak burning hours for a wildfire are between 3 and 6 p.m. when temperatures are high, winds pick up and humidity lowers, Mitchell said.

“I like the excitement of knowing we can manipulate the fires as we need to in controlled burns,” Cline said.

“It’s damn dangerous,” Mitchell said. “Unfortunately people get hurt and killed doing it. But we know what we can and can’t do.”

“This is my lifetime goal,” he said. “The job is to take care of and protect the land; it’s what the Tribe has entrusted us to do.”