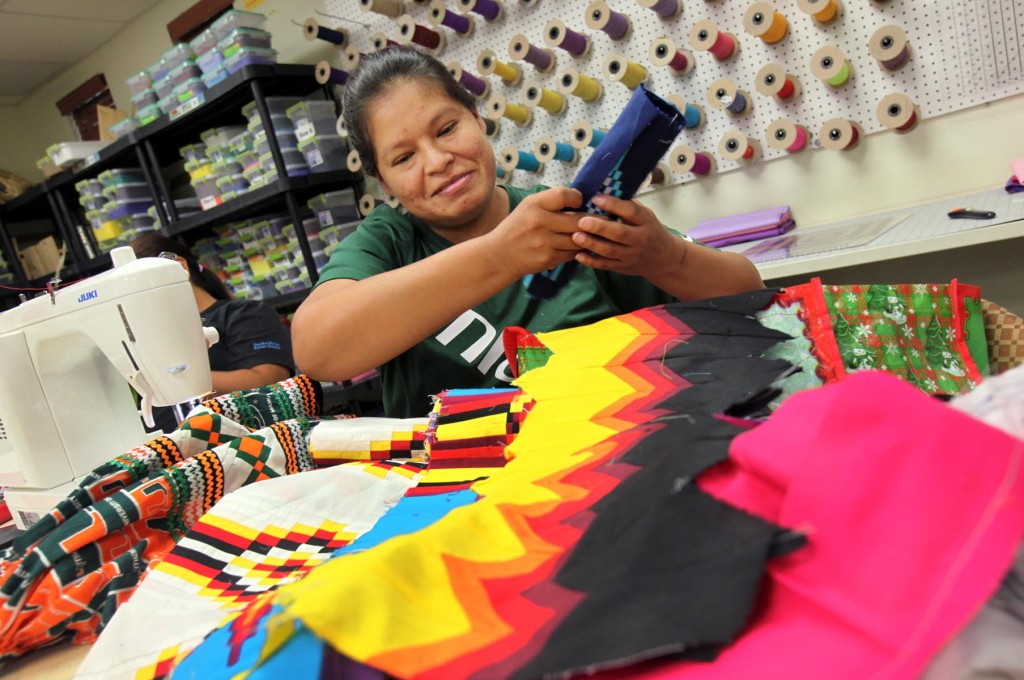 “Sewing just wasn’t my thing. I didn’t have the patience for it … when I started working here I had to learn,” Hall said while surrounded by sewing machines and tools to fashion patchwork strips, dresses, skirts, vests and shirts.

In a little over a year, the once reluctant seamstress has garnered a reputation as a patchwork artist. Her stitching is impeccable, her color blends are fluid and aligned, and her cuts are perfectly measured, said Jane Billie, one of Hall’s biggest cheerleaders.

“I’ve seen Moleana come a long way, and it’s still surprising to me how good she is and that she keeps getting better,” Billie said.

Billie, a patchwork seamstress for nearly four decades, said Hall also stands out because she learned so quickly and at a more mature age than most first-time traditional crafters. Hall, 40, is the mother of eight children and grandmother of seven.

Her role at Immokalee includes planning craft sessions, teaching and keeping the culture room stocked. A wall is filled with plastic bins for beads in five different sizes and up to 25 colors. Another wall holds nearly 100 spools of flat and iridescent rickrack. A closet is stacked with dozens of reams of cotton fabric, solids mostly, but also seasonal, pop culture and athletic team prints.

Fifteen sewing machines are available for use, but Hall lugs her own Juki TL-2010 between home and work every day. At home, she tries to stop sewing and be asleep by 1 a.m. but sometimes won’t stop until the job is done.

Occasionally, she’ll suffer a creative block and turn to beading for fun, but it’s not long until she is reinspired by memories of watching her aunt Lydia Cypress, with whom she lived for many years, sew into the night.

“I wondered why my aunt stayed up late all the time. You want to get it done,” Hall said.

When she is not maintaining the culture work room, planning culture activities or teaching, Hall sells patchwork strips and clothing. Customers tell her what they want or they bring pictures which she studies, dissects in her head, redesigns on graph paper and refashions with her own touches in colors that define the design. Fire colors mixed with turquoise and pink and purple combinations make up her favorite color pallets, but Seminole colors are most frequently requested.

Juanita Martinez, who works part-time for Culture, said Hall’s work is always more delicate, intricate and tedious than most patchwork.

“She takes on the difficult patchwork. Moleana is pretty unique that way,” Martinez said.

If Hall makes a choice that is not what buyers exactly asked for, they either love it anyway or someone else buys it.

Billie said Hall is a perfectionist who is eager to try new techniques or invent her own – and she is not afraid of starting over.

“Moleana does new, modern styles, so that’s a lot of strips to cut and make sure the colors are aligned and perfect. If she gets it wrong, she’s not afraid of ripping it out,” Billie said.

Hall’s busiest weeks so far have occurred before Indian Day, Brighton Field Day and Tribal Fair where her clothing and patchwork strips garnered a handful of clothing contest awards.

“But I don’t sew to win contests,” Hall said. “What I think about [when sewing] is life, how far I’ve come in sewing and how proud I am of myself. I wish my mom and dad were around to see it,” Hall said.

In March, she made a wedding skirt and blouse for her cousin Kathy Cypress and a matching wedding vest for the groom, Neil Prager. Hall layered a thin veil of lace over the skirt to create the look of romantic, impressionistic art. The entire ensemble was sewn in four days.

Hall said the assignment was her first high-pressure job and admitted she took the vests apart and started over three times.