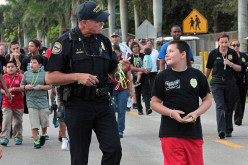 For 30 years, Americans have come out of their homes and taken back their streets on National Night Out (NNO). About 350 Tribal members did the same Aug. 25 during the Seminole Police Department’s tribalwide Seminole Night Out to Prevent Crime.

“We want people to know we are here for them,” said SPD Lt. Richard Spotts, an organizer of the event. “We are targeting outside dealers who come here, sell drugs and get rich off the Tribe.”

SPD strives to build strong partnerships with residents to combat crime and drugs on the reservations. The goal is to eliminate negative outside influences, but SPD needs the help of Tribal members to achieve it.

“We are there to protect them,” SPD Chief of Police William Latchford said. “The better our relationship is with the community, the more effective we can be. When we are on the same team to fight the same challenges, we can’t have anything but success.”

In Hollywood, after a K-9 demonstration, residents of all ages walked through the reservation in a show of solidarity with SPD to help increase awareness of crime prevention.

“We hope kids will be more aware of their surroundings instead of being focused only on themselves,” said Shadoe Billie, who attended the event with her children Elias Jumper, 2, daughter August Billie, 1, and mother, Twila Billie. “We want them to watch out for each other.”

Founded by the nonprofit National Association of Town Watch in 1984, NNO – also known as America’s Night Out Against Crime – began as an effort to promote involvement in crime prevention activities, build police and community partnerships, strengthen neighborhood camaraderie, and send a message to criminals that neighborhoods are organized and ready to fight back. According to the association, more than 37.8 million people participate in 16,124 communities in the U.S. and Canada.

To strengthen their effectiveness, SPD works closely with the FBI and the U.S. Attorney’s Office to try criminals in federal courts instead of local courts.

Spotts said cases tried at the federal level often bring stiffer sentences for the guilty. Most SPD officers are Bureau of Indian Affairs certified and are U.S. Marshals, which gives them federal jurisdiction.

SPD’s message and determination are clear.

“We are here to stop this nonsense, and we aren’t going to put up with it anymore,” Spotts said.