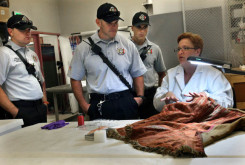 BIG CYPRESS — From a hurricane preparedness briefing emerged a brainstorm idea to prepare Seminole Tribe Fire Rescue for a “what if” scenario.

What if flames were to strike one of the Tribe’s most treasured buildings?

“We have a 169-page emergency plan, but it’s hard to know how to rescue things if you don’t know exactly where things are,” said Gene Davis, facility manager for Ah-Tah-Thi-Ki Museum and Tribal Historic Preservation Office (THPO) on Big Cypress Reservation.

Human life and then property are top priorities for Fire Rescue in an emergency, but when the property is treasured and its contents are irreplaceable, special response is necessary, said District Chief Brian Swartout, who heads the Big Cypress battalion.

“We never know when we get a call exactly what we will walk into. For us to be more familiar with a location means we can arrive and do our job without thinking,” Swartout said.

Big Cypress firefighters were retrained in four shifts from Sept. 2-5 in case of a fire at the Museum or THPO.

The campus layout, including 22 chickees and a 1-mile boardwalk that runs through swamp land, was reviewed in detail from a bird’s-eye view and from the ground. Interior spaces were revisited. Storage areas, in multi-office buildings and stand-alone structures, were viewed to list where additional supplies could be found.

Teams were informed of locations along the perimeter that provide the fastest and most direct access to rooms that store irreplaceable Tribal items, including original photographs, maps, newspaper articles and traditional artwork.

Nearly every building on the premises is always locked down, including some restrooms.

Security personnel are always present. Several entryways include mantraps and multiple pass codes or cards to gain access. Tours were geared to give firefighters speedy entry with little or no destruction to structures or content.

“With the in-depth refresher classes, there would hopefully be little need for missteps or smashing – just in case,” Davis said.

The teams were allowed peeks inside work environments that are also under constant internal protection. Some doorways are even equipped with sticky floor mats to decrease dirt and dust inadvertently trekked into otherwise sterile environments. They visited the Museum’s library and observed an archaeologist log microscopic findings from an 18th century Native American cloak.

“They were able to see the ultimate significance, after human life, of what needs to be protected,” Davis said.

Rooms that contain the most precious materials are protected by a dry chemical fire extinguishing device – the FM-200 – that will discharge at the first hint of fire even before firefighters arrive. Water sprinklers dot the ceilings of other rooms and 39 conventional fire extinguishers are strategically placed throughout the site.

Shift teams were also reacquainted with safety measures placed along the boardwalk to assist tourists who can experience dehydration or heat stress.

“Visitors come out here like Edmund Hillary climbing Mount Everest. Then they get hit with the South Florida heat and we have to go rescue them,” Davis said.

A map of the 1-mile ADA compliant boardwalk is marked with 53 stops, three solar-powered emergency phones and water spigots every 100 feet. A first aid kit is available in the traditional village site at the end of the boardwalk.

Lt. Jesus Lizarraga rated the tour as excellent from the perspective of firefighting.

In every location, fire personnel first noted entryways and the best extinguishing tactics. After checking the rooms’ purposes, they were impressed with the contents.

“I didn’t know about the ‘things’ that make up the art and history here. It helps to understand the Tribe’s past and why it is so important to protect it,” Lizarraga said.