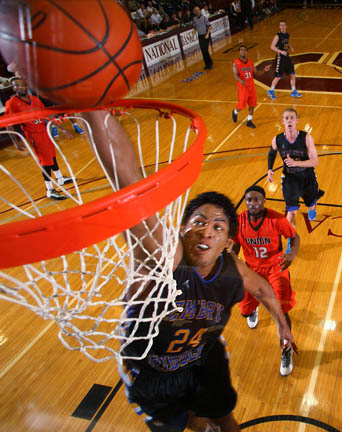 KANSAS CITY, Mo. — The avalanche of individual accolades didn’t sway the perspective of Embry-Riddle Aeronautical University senior DeForest Carter. His proudest accomplishment from the 2014-15 season came not from an award but rather his team’s 35-2 record.

“We had the best record ever in Embry-Riddle history,” he said. “Only lost two times this year; wish we could have kept it at one.”

It was the second loss that stung, a 91-81 setback to Cornerstone College, of Michigan, in the NAIA semifinals March 16 at College of the Ozarks in Point Lookout, Missouri.

“It was a tough one,” Carter said. “They were great shooters and ended up winning the national championship, so it was that type of caliber game that we played, and it was every night we played like that and just one team got us in the end.”

Carter’s 11 assists and seven steals were game-highs, and he scored 13 points as his four-year career in an Embry-Riddle uniform – which won’t be forgotten anytime soon – concluded.

The kid who began playing basketball barefoot on a Big Cypress dirt road next to his grandmother Mary Tigertail’s house firmly carved his name into the record books at Embry-Riddle.

“All the basketball camps I took him to paid off,” said Carter’s mother, Myra Jumper, who proudly watched her son at the NABC-NAIA All-Star Game March 21 in Kansas City.

Robert Hill, Carter’s stepfather, admitted he was surprised that Carter generated such a successful collegiate career.

“But I knew how hard he worked. He did better in college than he did in high school,” Hill said.

Carter, a 6-foot-2 converted point guard who was recruited as a small forward out of Montverde Academy near Orlando, finished his career as Embry-Riddle’s all-time leader in assists and steals.

In addition to the career marks, this year Carter set single-season team records with 262 assists and 149 steals. He led all NAIA Division II players in total steals and steals per game and finished second in total assists and assists per game. He also contributed 484 points, 161 rebounds and 41 blocks.

Although Embry-Riddle came up two wins shy of a national title, the Eagles departed their final NAIA season as Sun Conference champions. Carter scored 19 points, made a game-high seven steals and had two blocks to help rally Embry-Riddle past Southeastern University, 90-86, in overtime in the conference championship game March 3 in Daytona Beach.

“To win a conference championship in our home gym was simply amazing,” said Carter, who also had six assists and five rebounds. “We didn’t lose a single game at home this year and it’s my senior year. There are just so many factors that go into how special that game and win was for us.”

Embry-Riddle trailed by 14 points with 10 minutes left in the second half before mounting a comeback.

“The rally started on defense for us; that’s what we pride ourselves on as a team. We got stops and scored on those stops,” Carter said.

In the final five minutes of the half, Carter had two steals, two assists and scored six points, including a layup with two minutes left that gave Embry-Riddle its first lead of the game.

He assisted on a basket by Dalton Barnes (27 points) with 30 seconds left that sent the game into overtime tied at 73-73.

Midway through the five-minute extra session, a layup by Carter put Embry-Riddle ahead 82-75.

Embry-Riddle led by two points with seven seconds left when Carter made two free throws to clinch a memorable victory that he said ranks “at the top” of his career. 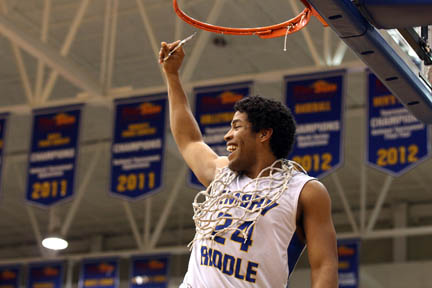 Carter said he expects to remain active in basketball – perhaps as a pro player or a coach – and he’ll have four years of memories as an Embry-Riddle player to fondly recall no matter his future path.

“Every day, going to work with those guys, blood, sweat and tears; we embraced that, and it was great,” Carter said. “That’s the one thing I’m going to miss, just the whole family atmosphere and the great program that Embry-Riddle is.”