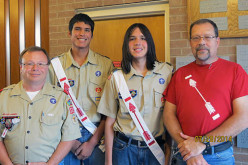 ANADARKO, Okla. — Fraternal twins Coleman and DaKoda Josh have one more thing in common after both became Eagle Scouts, the highest rank achievable in the Boy Scouts of America, in July.

The 18-year-olds joined the Scouts at age 6 and stuck with it all the way, a feat only 5 percent of all Boy Scouts accomplish. Other notable Eagle Scouts include former President Gerald Ford, Associate Justice of the U.S. Supreme Court Stephen Breyer, astronaut Neil Armstrong, Wal-Mart founder Sam Walton and Academy Award-winning director Steven Spielberg.

From 1912 to 2013, 2.3 million scouts earned the Eagle Scout rank. Requirements include earning 21 merit badges; holding a troop leadership position for six months; planning, developing, leading and finishing a community service project; and passing an Eagle Scout board of review.

“I’m very proud of them,” said Salli Josh, the boys’ mother. “I know they are ambitious because of this. They’ve grown to be responsible, respectful and helpful young men.”

For his community project, Coleman built a wheelchair-accessible garden for residents of the Silvercrest Manor retirement home not far from his home in Anadarko, Oklahoma. The 2-by-4-foot garden is raised about 35 inches off the ground for easy access.

The idea for the project came after Coleman talked to his neighbor, who works at Silvercrest. Coleman received approval from the Eagle board and met with the home’s representatives in March. The project was completed in May.

From the start, DaKoda knew he wanted his project to benefit Washita Valley Head Start, where he attended school as a 4 year old. DaKoda chose a beautification project. He cleared a 10-foot strip of land and planted flowers and bushes in the front of the school.

“The point of the project is to help us understand how to be leaders and see projects through,” Coleman said. “Even if it’s a simple project, there is a lot of planning and work that goes into it.”

Coleman and DaKoda had to learn organizational and managerial skills to complete their projects. They each had several Scouts work for them, and they helped on each other’s projects.

“I’d never been the one to give orders before; it was a different feeling. It felt good,” DaKoda said. “I helped them out and made sure it was done my way.”

The rewards of the project surpassed the achievement.

“I’m proud to be able to look at how many years I’ve been in Scouts and say I reached the highest rank,” Coleman said.

“It’s done, complete,” DaKoda added. “Not a lot of people get to become Eagle Scouts.”

The boys will be recognized at an Eagle Scout award ceremony in November in Oklahoma. In a separate honor, Coleman and DaKoda were elected by their peers to the Order of the Arrow, Scouting’s national honor society.

“Considering all the crime, drinking and drugs around, they didn’t fall to peer pressure,” Salli Josh said. “They don’t run around, they have integrity and they appreciate what they’ve earned through hard work. They are such good boys. I don’t have to worry about them.”

The twins will now tackle college. In January, Coleman will attend the Institute of American Indian Arts in Santa Fe, New Mexico to study jewelry design and drawing; DaKoda is attending Spartan College of Aeronautics and Technology in Tulsa, Oklahoma where he is studying aviation maintenance.

The young adults have advice for kids interested in Boy Scouts.

“It teaches you to be an all-around good person, to help others when they need help and to handle situations better,” DaKoda said.

“If you aren’t in Scouts, join,” Coleman added. “You do things you wouldn’t normally do and you meet some pretty cool people.”