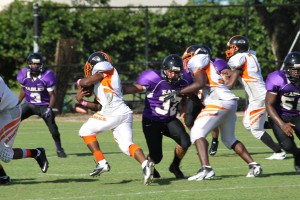 HOLLYWOOD — Brandtley Osceola went out with a bang. Leading Hollywood Christian’s football team through its first season in years, the senior made the last game his best.

The Hollywood Tribal member “was all over the field” at the away game against Miami Christian on Oct. 5, coach Joel Dunn said. “He was our go-to guy all day.”

The team won 32-6, finishing the season with a 2-5 record, and Brandtley, 17, hung up his helmet to end his first and last season of high school football.

“He was huge on offense and defense,” said Dunn of the full-back tight end and linebacker. “He played well all season.”

Many agreed that defense was where he shined most.

“He tackles hard,” said his mother, Brande Clay, who cheered him on at nearly every game. “He’s so aggressive, and it’s just really fun to watch him play.”

Brandtley credits several years of hard work and experience, as well as his parents’ support, to his success as an athlete.

He got his start playing football for a pee wee team in Okeechobee when he was about 10 years old. His athleticism was also built by other sports, including basketball, baseball and rodeo.

“In everything that he does, he puts 200 percent,” Brande said. “He plays his heart out no matter what it is.”

When he and his family moved back to the Hollywood Reservation, Brandtley played football for the Pasadena Panthers’ 135 league and then started playing for Hollywood Christian in middle school.

The lull was tough for Brandtley since football is his favorite sport. With his free time, he got into boxing, but he also got into some unhealthy habits, influenced by his peers, he said.

Last summer though, he received a letter from the school’s new athletic director, Dunn, informing him that football was coming back, albeit as a seven-man game instead of 11, and he wanted Brandtley to play.

“I was just so excited,” Brandtley said. “I just had to overcome [the bad influences], and football kind of helped me out with that.” 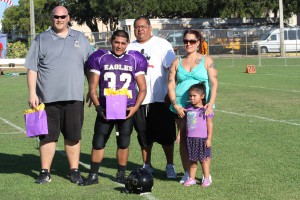 Brandtley said he turned his life around, refocusing on football and school, as well as adjusting his diet. He lost about 30 pounds in the last half year by eating healthier foods in controlled portions. He has a 3.0 GPA and is on track to graduate high school this spring.

His coach had all positive things to say about Brandtley, as well.

“The thing about Brandtley is just his consistency – that’s both with his personality and his playing,” Dunn said. “He’s a quiet leader. He leads by example. He practices hard and shows up every day.”

Brandtley said his favorite parts of the sport are the adrenaline rush before the game and tackling players or running the football in play.

“He’s a great guy,” Dunn said. “I loved having him on the team…I think he’s a tremendous leader, and God’s going to tremendously use him down the road one day.”

Brandtley’s compiling his highlight tape so he can start sending it out to colleges.
“I’m just gonna train and try to get better, faster, stronger so I can try to perform at the next level of college,” he said.

Brandtley expressed his appreciation for the Tribe’s support of his education.
“I’m just grateful that I’m part of the Tribe and that we can do all this stuff that they provide,” he said.